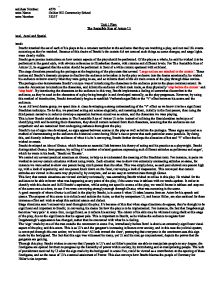 The Resistible Rise of Arturo Ui Visual, Aural and Spatial Visual: Brecht intended the set of each of his plays to be a constant reminder

Candidate Name: Bethany Weston Candidate Number: 4570 Centre Name: Oulder Hill Community School Centre Number: 33237 Unit 1 Play: The Resistible Rise of Arturo Ui Visual, Aural and Spatial Visual: * Brecht intended the set of each of his plays to be a constant reminder to the audience that they are watching a play, and not real life events occurring as they're watched. Because of this desire of Brecht's the curtain did not conceal such things as scene changes, and stage lights were clearly visible. * Brecht gave precise instructions on how certain aspects of the play should be performed. Of the play as a whole, he said he wished it to be performed in the grand style, with obvious references to Elizabethan theatre, with curtains and different levels. For The Resistible Rise of Arturo Ui, he suggested that the action should be performed in front of a white curtain spattered with ox blood. * The stage directions preceding the prologue at the beginning of the play state that several 'Large notices are attached to the curtain'. These notices aid Brecht's dramatic purpose to disallow the audience to be taken in by the play or drawn into the drama emotionally; he wished his audience to know exactly what they were going to see, and so informs them of the six main events of the play through these notices. ...read more.

The fact that this sign was witnessed by many, yet Ui and his men go unquestioned, depicts the power that the gangsters are gaining. * Through this play, Brecht wishes to convey that if people in Ui's and so Hitler's position are able to manipulate people to any degree, the floodgates are opened for them to progress up the hierarchy of power within society, by intimidating and so manipulating people. The lack of punishment received by Ui after the sign made by the bodyguard in scene five, could be viewed as a contribution to the opening of these floodgates, and so the cause of Ui's eventual attainment of Power. This also conveys how Brecht blames the people of Germany for Hitler's rise to power. * It's stated in scene seven that 'Giri wearing Bowl's hat cuts through the crowd, followed by several gangsters carrying large gasoline cans.' This is an extremely significant visual facet of the play, as we're indirectly told here, that Giri has murdered Bowl, as we're told that Giri often wears the hats of the people he's 'rubbed out', earlier in the play. As well as receiving this information here, this visual feature illustrates Brecht's overt criticism of the 1930's public and governmental lack of resistance to Hitler, as it states that they walked through with 'large gasoline cans', such that people wouldn't be able to miss. ...read more.

of a specific point within a Brechtian play, the events that are occurring within that scene should be apparent, even without words or movement. This technique was developed from techniques used in Greek theatre, in which gesticulation was extremely vital as often audience members could not here the dialogue, or could not understand it. We did an exercise in which we were to pair up and each pair would stand, facing each other, at opposite ends of a busy room. We were then to shout nursery rhymes across from one member of the pair to the other, however through the noise I found it impossible to convey what I was attempting to say without employing gestures, or 'gest', hence illustrating the significance of 'gest' in Brecht's plays. * Although the spatial elements of a play are sometimes difficult to express in words, Brecht uses stage directions at several points in the play to try and communicate how he wishes the space to be used. This fact alone depicts the importance that the space be used effectively, to Brecht in these scenes. For example, in scene 7, Brecht writes that 'Dogsborough, who is ill, is sitting on the platform beside Ui', and that Clark is 'in the background', therefore communicating that Clark's hidden agenda in his involvement with Ui is significant to the plot, and so Brecht uses spacing on stage to convey this to the audience. ...read more.