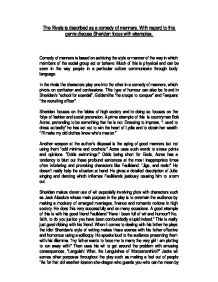 &quot;The Rivals&quot; by Richard Sheridan is described as a comedy of manners.

The Rivals is described as a comedy of manners. With regard to this genre discuss Sheridan focus with examples. Comedy of manners is based on satirizing the style or manner of the way in which members of the social group act or behave. Much of this is physical and can be seen in the way people in a particular culture communicate through body language. In the rivals the characters play one into the other in a comedy of manners, which pivots on confusion and confessions. This type of humour can also be found in Sheridan's "school for scandal", Goldsmiths "he stoops to conquer" and Farquars "the recruiting officer". Sheridan focuses on the fables of high society and in doing so focuses on the folys of fashion and social pretension. A prime example of this is countryman Bob Acres, pretending to be something that he is not. ...read more.

He does this very successfully and on many occasions. A good example of this is with his good friend Faulkland "Have I been full of wit and humour? No, faith, to do you justice you have been confoundedly stupid indeed." This is really just good ribbing with his friend. When it comes to dealing with his father he plays the idiot Sheridan's style of writing makes these scenes with his father effective and humorous using a soliloquy. He speaks loud to the audience presenting them with his dilemma, "my father wants to force me to marry the very girl I am plotting to run away with!" Then uses his wit to get around the problem with amusing consequences, "Languish! What, the Languishes of Worcestershire?" Jacks wit serves other purposes throughout the play such as making a fool out of people "As for that old weather-beaten she-dragon who guards you-who can he mean by that?" ...read more.

Lydia's romantic notions and her ignorance of herself are just as appealing to the audience as the other comedies of manners and many hope that she would receive her poetic justice. This is typical of the higher society because they want everything their way. This is also a form of dramatic irony because the audience knows about her love affair and the true identity of Ensign Beverly. Faulkland has exaggerated things out of all proportions and is paranoid up to a point about his relationship with Julia he has a melancholy attitude. He is neurotic and over-sensitive "I fear for her spirits-her health-her life." I think that he that sensitive that audience look upon him as a sort of women he isn't really the man in the relationship at times and this appeals to the audience. In conclusion Sheridan focuses his humour on that of upper class society and greatly exaggerates it. He uses basic principles for amusement e.g. ignorance, obsession, manners, intelligence and verbal communication. ...read more.