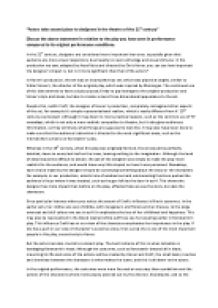 The Seagull -Actors take second place to designers in the theatre of the 21st century Discuss the above statement in relation to the play you have seen in performance compared to its original performance conditions.

﻿?Actors take second place to designers in the theatre of the 21st century? Discuss the above statement in relation to the play you have seen in performance compared to its original performance conditions. In the 21st century, designers are considered more important than ever, especially given that audience are more visual responders, due heavily to new technology and visual stimulus. In the production we saw, adapted by Anya Reiss and directed by Chris Honer, you can see how important the designer?s impact is, but is it more significant than that of the actors? In Honer?s production, the set was an incomplete box set, which was placed at angles, similar to Viktor Simov?s, the director of the original play, which was inspired by Meiningen. The continued use of this idea seemed to have a dual purpose; firstly to pay homage to the original production and Simov?s style and ideas, but also to create a more three dimensional appearance to the set. ...read more.

For example, in our production, eclectic mix of washed out and uninteresting furniture pushed the audience?s focus where it was needed, such as the gun left by the door in act 4. This shows the designer has more impact than before on the play, effected how we see the story, but also the characters. Once particular instance where you notice the extent of Croft?s influence is Nina?s costumes. In the earlier acts, her clothes are very childlike, with dungaree?s and floral summer dresses, to the large overcoat and dull colours we see in act 4.It emphasises the loss of her childhood and happiness. This may also be represented in the blood stained white outfit we see her wearing earlier in Konstantin?s play. This influence Croft has on our view of the characters emphasises her importance in the play. If she has a part in our view of character?s as well as story, then surely she is one of the most important people in this play, second only to Honer. But the actors are also crucial to a decent play. ...read more.

In its original conditions, the play would have had electric lighting, but only dimming effects at the time. The sound effects where very detailed but all had to be created naturally in some way. Whereas in Honer?s production, there was much more available, such as the use of microphones in Konstantin?s play. But the best example is the cyclorama. Croft used this cyclorama throughout to not only show the time of day and weather, but also to set the mood for each scene, such as the dark, miserable colours when Nina returns. Overall, I find that whilst both designers and actors have a massive impact on the plays, I do agree that actors take second place to designers in the 21st century. The development of technology has given more scope, but it is mainly down to the changes in the nature of theatre. Symbolism is much more important that realism, and as such the design of the play communicates a lot more with the audience than in the 19th century. But if a play is to be successful, the director, designer and actors must work together. ...read more.