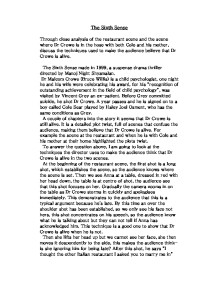 The Sixth Sense. Through close analysis of the restaurant scene and the scene where Dr Crowe is in the house with both Cole and his mother, discuss the techniques used to make the audience believe that Dr Crowe is alive.

The Sixth Sense Through close analysis of the restaurant scene and the scene where Dr Crowe is in the hose with both Cole and his mother, discuss the techniques used to make the audience believe that Dr Crowe is alive. The Sixth Sense made in 1999, a suspense drama thriller directed by Manoj Night Shyamalan. Dr Malcom Crowe (Bruce Willis) is a child psychologist, one night he and his wife were celebrating his award, for his "recognition of outstanding achievement in the field of child psychology", was visited by Vincent Grey an ex-patient. Before Grey committed suicide, he shot Dr Crowe. A year passes and he is signed on to a boy called Cole Sear played by Haley Joel Osment, who has the same conditions as Grey. A couple of chapters into the story it seems that Dr Crowe is still alive. It is a detailed plot twist, full of scenes that confuse the audience, making them believe that Dr Crowe is alive. For example the scene at the restaurant and when he is with Cole and his mother at their home highlighted the plots twist. To answer the question above, I am going to look at the techniques the director uses to make the audience think that Dr Crowe is alive in the two scenes. At the beginning of the restaurant scene, the first shot is a long shot, which establishes the scene, so the audience knows where the scene is set. ...read more.

Now the interview shot has been reversed. In this shot the audience have more questions popping up in their heads; how come the bill went towards Anna? Did the waitress even notice Dr Crowe? What's Dr Crowe's reaction of the bill going to Anna? While the audience are thinking about these questions, no response comes out of Anna. The interview shot that has been reversed is another good technique that made us believe Dr Crowe is alive. Dr Crowe then tries to take the bill, but Anna gets it first and writes a cheque. A close up shot has been produced, focusing on her writing the cheque. At this moment the audience think that Anna's annoyed and disappointed. The bill is taken away, the camera zooms into a medium shot on Anna, and she sighs heavily then looks up saying "Happy Anniversary". The audience are now sure she is disappointed as she said that sarcastically, and are now wondering what's Dr Crowe's reaction when she said that? The camera follows Anna as she gets up and leaves without another word. This makes us think that Dr Crowe is alive. In this scene, the techniques that Manoj used, lead us assuming that Dr Crowe was alive. Now I am going to analyse the scene where Dr Crowe is in the house with Cole and his mother. The scene opens on a medium shot two shot, with Cole's mother Lynn, sat facing Dr Crowe who is also seated. ...read more.

To the audience it seems that Cole's mother is leaving Cole with Dr Crowe for an hour session. Cole then has a psychiatric session with Dr Crowe. In this scene the audience saw that Cole felt awkward. It seemed that Cole's mother was getting Cole ready for the session with Dr Crowe. In response to the question above, Manoj used clever techniques to make the audience believe that Dr Crowe was alive in those two scenes, for example in the restaurant scene, he used an over the shoulder shot; as we could not see Anna face and her reactions but Dr Crowe's, we think this shot shows that this is an typical argument because he is late. Another example is when the interview shot was reversed onto seeing Anna taking the bill, because it shows she's angry at him for being late and that she would rather take the bill instead of him taking it; this happens in some arguments between people. In the scene when Dr Crowe was in the house with Cole and his mother, Manoj used a medium shot two shot when there was no conversation between Dr Crowe and Lynn, which was a good technique that made the audience believe that Dr Crowe was alive because in that shot, we assumed that Cole's mother and Dr Crowe had been talking to each other, (when we felt as though we walked in on something). When Cole's mother left Cole with Dr Crowe, we again assumed that she's going to leave him for a psychiatric session with the doctor, making us believe that Dr Crowe is alive. ...read more.