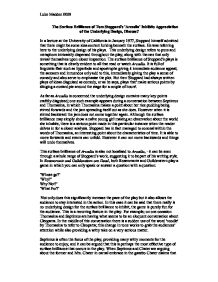 The Surface Brilliance of Tom Stoppard's 'Arcadia' Inhibits Appreciation of the Underlying Design, Discuss? In a lecture at the University of California in January 1977, Stoppard himself admitted that there might be some idea content lurking beneath the surface. He was referring here to the underlying design of his plays. This underlying design refers to puns and metaphors intricately dispersed throughout the play, along with themes that only reveal themselves upon closer inspection. The surface brilliance of Stoppard's plays is something that is clearly evident to all that read or watch Arcadia. It is full of linguistic flair such as hyperbole and apostrophe giving it immediate audience appeal, the sarcasm and innuendos only add to this, immediately giving the play a sense of comedy and also serve to emphasise the plot. But then 'Stoppard had always written plays of ideas disguised as comedy, or as he says, plays that' make serious points by slinging a custard pie around the stage for a couple of hours'. As far as Arcadia is concerned the underlying design contains many key points craftily disguised; one such example appears during a conversation between Septimus and Thomasina, in which Thomasina makes a point about her rice pudding being stirred forwards and the jam spreading itself out as she does. However when it is stirred backward the jam does not come together again. ...read more.

For example the use of hyperbole as Septimus argues with Chater and claims that Mrs Chater's reputation could not be defended by a 'platoon of musketry deployed by rota'. However, occasionally there is a serious point to be made; a good example of this is Thomasina's rice pudding metaphor. It can be said in this instance that the surface brilliance does inhibit the underlying design because the audience may not think any deeper than Thomasina simply making a statement about something her rice pudding does instead of really looking into the complex observation about the passage of time. For this point to be emphasised it was once said that 'Stoppard had undertaken to provide a satisfying evening's entertainment for a broad spectrum of theatregoers, and to do so with out underrating the audience's intelligence'. With this idea in mind, one can say that perhaps Stoppard used the metaphor simply to get a complicated point across. If Stoppard had attempted to explain what he was trying to say in complicated terms, perhaps the play would not have been as enjoyable for the audience and may have meant they would not have been able to fully appreciate the point Stoppard was trying to make. When looking at this example alone it can be seen why Stoppard may have thought it appropriate to blur the underlying design of the play with this surface brilliance. ...read more.

To which Septimus can only reply by attempting to move the conversation on. Throughout the play the surface brilliance continually keeps the audience interested, and it is because of this that it seems Stoppard intentionally uses it so that the audience may concentrate more effortlessly on the play and discover the underlying design if they feel the need. The sound of gunshots that continually reappear during the play, present the audience with an opportunity to make the decision, whether to appreciate it as a foreboding of the death of Chater, or simply as a gunshot during a hunt. Arcadia, as a whole seems to present a strong argument that the surface brilliance really does not inhibit the underlying design; the audience is able to fully appreciate each part of the play. The language, characters and plot provide entertainment for the whole audience but particularly appeals to those who do not wish to examine the play closely. Then the rest of the audience can look beneath the surface whilst appreciating it and also appreciate the underlying design by recognising the parallels and examining the characters and language very closely. Although Arcadia is structured in quite a complicated manner it is easy enough to follow. The language as a whole is quite colloquial making it very appealing to a whole variety of audiences. Studying the surface brilliance alone would not make the play confusing, showing that Stoppard had perhaps thought about this and made the play enjoyable to those who will look deeply at it and those who will purely enjoy the surface brilliance. ...read more.