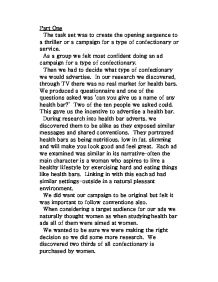 Part One The task set was to create the opening sequence to a thriller or a campaign for a type of confectionary or service. As a group we felt most confident doing an ad campaign for a type of confectionary. Then we had to decide what type of confectionary we would advertise. In our research we discovered, through TV there was no real market for health bars. We produced a questionnaire and one of the questions asked was 'can you give us a name of any health bar?' Two of the ten people we asked could. This gave us the incentive to advertise a health bar. During research into health bar adverts, we discovered them to be alike as they exposed similar messages and shared conventions. They portrayed health bars as being nutritious, low in fat, slimming and will make you look good and feel great. Each ad we examined was similar in its narrative-often the main character is a woman who aspires to live a healthy lifestyle by exercising hard and eating things like health bars. Linking in with this each ad had similar settings-outside in a natural pleasant environment. We did want our campaign to be original but felt it was important to follow conventions also. When considering a target audience for our ads we naturally thought women as when studying health bar ads all of them were aimed at women. We wanted to be sure we were making the right decision so we did some more research. ...read more.

When it came to the role of director, the stronger characters of the group (again Shaun and I) took on this role. The entire group were encouraged to voice any valuable points or criticisms when filming. When it came to allocating the role of actor we decided that only one of us, Danielle, could realistically feature in the campaign. The first ad was almost created for Danielle so she suited the role perfectly. The other two ads needed adults that fitted the role required otherwise it would look very amateur and unrealistic. This was not the impression we wanted to give. The original guidelines for the campaign did alter during the planning as some of our ideas when explored further became difficult to expand and develop. I believe planning is a vital aspect to the completion of campaign, if not the most important. Part Three The construction was maybe the hardest part of the task. The first problem was finding time to film where the entire group could be present. This was impossible so we decided to divide the adverts up. Ad1 was filmed in two parts, the first by myself and the second by Shaun. Ad2 was filmed by Shaun and ad3 by me. When filming for Ad3, I wanted to display a variation of shot angles so there would be a range to choose from when capturing. When I filmed it was the evening so I had to take light into consideration. I put the main lights on and drew the curtains of the living room. ...read more.

In ad3, the opening shot of the couple is interesting. The living room is an earthy green colour giving connotations of nature, the environment-longevity. The characters of this ad are very relaxed in their body language. Giving the impression they lead a laid-back lifestyle. The lighting for this shot is slightly dim to make the mood cosy and inviting, in fact the first part of the ad begins with this atmosphere in order to make the audience feel comfortable. If our campaign were to be on TV, I would choose it to be advertised on BBC1. I think all women in our target audience appreciate the programmes BBC1 has to offer. I would choose for Ad1 to be aired between late evening and night as I feel the kind of target audience for this ad would be watching TV at this time. Ad2 would be on in mid-afternoon to early evening as I feel kids will be home from school then. Ad3 would be aired between late-afternoon and early evening as again I feel our target audience (a married couple) would want to unwind and relax in front of the TV. If I had more time I would make changes to our adverts. Firstly there are a couple of shots that are a bit unsteady. I think this brings down the professional look the campaign has. Also the package for our bar could have been a little more imaginative and eye-catching. Despite this I do think our campaign has been successful as I feel we have achieved what set out to and have created the message we intended. ...read more.