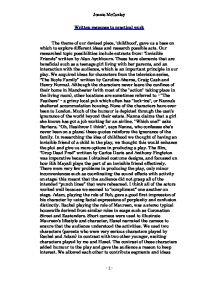 The theme of our devised piece, 'childhood', gave us a base on which to explore different ideas and research possible acts. Our researched topic possibilities include extracts from: &quot;Invisible Friends&quot; written by Alan Ayckbourn.

Written response to practical work The theme of our devised piece, 'childhood', gave us a base on which to explore different ideas and research possible acts. Our researched topic possibilities include extracts from: "Invisible Friends" written by Alan Ayckbourn. These have elements that are beneficial such as a teenage girl living with her parents, and an interaction with the audience, which is an important principle in our play. We acquired ideas for characters from the television series, "The Royle Family" written by Caroline Aherne, Craig Cash and Henry Normal. Although the characters never leave the confines of their home in Manchester (with most of the "action" taking place in the living room), other locations are sometimes referred to - "The Feathers" - a grimy local pub which often has "lock-ins", or Nanna's sheltered accommodation housing. None of the characters have ever been to London. Much of the humour is depicted through the cast's ignorance of the world beyond their estate. Nanna claims that a girl she knows has got a job working for an airline. ...read more.

We knew that the stage area was going to be limited so we had to keep that in mind when designing and preparing the stage. The Royle Family television series gave us the idea of using only a living room and kitchen illustrated by a grotty old couch and remote control for the living room, and pans on a table for the kitchen. This simple staging was effective, a 'kitchen-sink style drama was used because it provided adaptability in the area around the living room where we could have activities such as, a bingo hall, a darts tournament and a supermarket. Times and cultures were researched and we decided that the play should be set in current times as is The Royle Family, we also decided that we would have a stereotypical mancunian 'working-class' household with slight mancunian accents to illustrate the location of the play. Various texts and images were considered when writing the play, one of which was "Children's games" by Pieter Breuge. Although this painting captured the image of childhood very well we only had four characters on stage to work with and could not use a large playground scene. ...read more.

This was fundamental because without laughter the play wouldn't have fulfilled its purpose as a comedy. We will develop the costume to add hilarity and to trigger laughter in the crowd. The lighting was valuable as it established a passage of time, by dimming the lights after a scene it illustrates to the audience that a particular event has ended. I think the lighting was also a strength of the play. Although the lighting worked well, we did not perfect the timing of sound effects; this proved to be a weakness on two occasions where critical sound effects did not transpire. We will improve the play considerably before performing again, sound effects will be rehearsed to ensure that the audience behold the play as we intend it to be seen. Props may also be improved, one suggestion may be that we use a chip pan or deep fat fryer rather than a pan because a pan is not big enough to fully conceal items from the crowd. My individual performance will be improved by practising a more genuine Irish accent; this will boost my acting quality, as I will feel more self-confident reciting lines in front of the audience. ?? ?? ?? ?? Jonnie McCauley - 1 - ...read more.