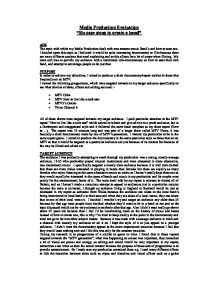 The topic with which my Media Production dealt with was amateur music Band's and how to start one.

Media Production Evaluation "Six easy steps to create a band" AIM The topic with which my Media Production dealt with was amateur music Band's and how to start one. I decided upon this topic as I believed it would be quite interesting documentary to film because there are many different sections that need explaining and so this allows for a lot of scope when filming. My main aim was to provide my audience with a committed info-documentary on how to start their own band, and attempt to encourage people to do just that. PURPOSE In order to achieve my objectives, I aimed to produce a short documentary/report similar to those that frequently air on MTV. I viewed the following programmes, which were targeted towards to my target audience specifically to see what choices of shots, effects and editing are used: - * MTV Cribs * MTV How to live like a rock star * MTV2's Gonzo * T4 on Channel 4 All of these shows were targeted towards my target audience. I paid particular attention to the MTV report "How to live like a rock star" which served to inform and give advice to a youth audience, but in a flamboyant and exaggerated style and it followed the same basic template as my short report (How to....). The report was 10 minutes long and was part of a larger show called MTV News; it was basically a short documentary made by one of MTV's presenters. I wanted my production to be in the same report genre. I aimed to produce the documentary in the same particular style as those that air on MTV so that it would be targeted at a particular audience not just because of its content but because of the way its filmed and edited etc. TARGET AUDIENCE The audience I was primarily attempting to reach through my production was a young, mostly teenage audience, 13-25 who preferably played musical instruments and were interested in more alternative, less mainstream music. ...read more.

But I found that they were ideal for interviewing anyway, as they were able to explain how their band came together and offer advice to my audience on how to start their own bands. I intended to portray the band member's, as the experienced, knowledged, experts on the subject matter. I consciously made the decision not to interview the music teacher or any such expert on music that was available to me at school because I wanted the band member's offering advice to be someone my target audience could identify with and feel relaxed with which is not the effect you get with someone in authority. I took the decision to interview these people in their respective environments; however being only allowed to film in school this posed as quite a problem as there are not many visual signifiers to music in our school because the music room was similarly out of bounds. But I managed to alleviate this somewhat when interviewing "The B-Sides" who I was able to interview in a car which when the voice over serves as an interpreter explaining this was "The B-Sides arriving at their next gig" even though they were actually in the schools car park during dinner hours. I also had background music playing in every scene, as I believed this would be helpful for the audience, as it would serve as an audible signifier as to who and what the people were concerned with. Having "The B-Sides" interviewed in a car "just before a gig" as the narrator explains (even though this wasn't the case, it adds an air of credibility to my production, at least to the audience it does because it shows that the interviewees were filmed in their respective surroundings). INNOVATIONS One of my main aims of my production was to be innovative in certain areas. I didn't want my production to be a run of the mill youth documentary, and so thus intended to be innovative in some ways. ...read more.

shot and you can see various objects lying on the floor around me as well which I didn't think were in shot. By the end of filming I realised what I had done, and wouldn't have made the same slight errors that I had made here. Therefore, some of my later shots were better than my first shots, and I think my shots would have been more professional if I was to repeat the process. Also I would definitely try and rent or borrow another camera, one that I could take off school premises so I could obtain more interviews with music engineers and talent scouts etc and perhaps several more shots to expand my documentary even more. I have most definitely learnt several lessons, and concepts surrounding the media. One thing, which I have learnt, is how, through careful editing, potentially easy it is for the media to manipulate both people and stories, to gain a certain angle, and edge to their production, and therefore what a potentially powerful tool the media is and can be. I have also learnt that there are many choices and decisions media producers have to make in order to reach their specific target audience, and how complicated it can all be. I have learnt the true restrictions one's productions context can hold over a production, and how it can restrict both the effectiveness, and value of a production. I have also learnt about the importance of genre, and how difficult it is to be innovative, and also how important genre can be in audience expectations. I have also the mount of work that has to go into a practical production, and the time and energy it takes, to produce something worthwhile especially with a genre which is very informal such as this because as an audience member myself I did not realise the amount of structure and planning that goes into informal "MTV style reports", especially into writing a script and the editing afterwards. Sion Brooks 12.4 ...read more.