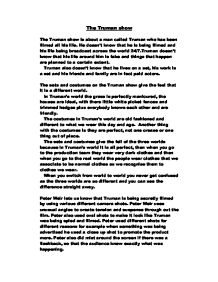 The Truman show The Truman show is about a man called Truman who has been filmed all his life. He doesn't know that he is being filmed and his life being broadcast across the world 24/7.Truman doesn't know that his life around him is fake and things that happen are planned to a certain extent. Truman also doesn't know that he lives on a set, his work is a set and his friends and family are in fact paid actors. The sets and costumes on the Truman show give the feel that it is a different world. In Truman's world the grass is perfectly manicured, the houses are ideal, with there little white picket fences and trimmed hedges plus everybody knows each other and are friendly. The costumes in Truman's world are old fashioned and different to what we wear this day and age. Another thing with the costumes is they are perfect, not one crease or one thing out of place. ...read more.

The break for freedom scenes comes together when Truman suspects that he is being secretly filmed. He then tries to escape in a boat, however the production team eventually manage to locate him and try everything to stop Truman leaving i.e. thunderstorm, etc.... Christof is even prepared to kill Truman and said, "He was born in front of a live audience he can die in front of a live audience". Truman survives all that and then reaches the end of the fake sea. When Truman reaches that stairs come up from the water and Truman begins to climb them. When he gets to the top Christof talks to him, his voice come through the sky like he is God. Christof talks to him like a friend, his voice is soft and he says things like " in my world you have nothing to fear" and " you belong here with me". ...read more.

When Christof talked to Truman they used special effects to make it more like a God like figure with the echoing of his voice and how Christof himself talked softly and slowly to make an impact. Christof is also like God to the rest of the actors because he tells them what to do and they always turn to him when they become stuck for example when Truman goes missing Christof sends Truman's best friend round and his best friend is always looking to the camera for instructions. I think Peter Weir has made the character more like a God figure with now Christof acts because he is emotionally attached to the show and would try anything to keep Truman there, as the show is his life. I don't agree with what they have done to Truman because even though they say Truman can leave when ever he wants he doesn't know that he is being filmed so why should he even thing he can leave. If producer want to do something like the Truman show I think the person has a right to know. ...read more.