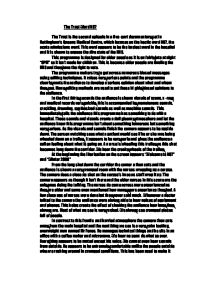 The Trust Ward D57 The Trust is the second episode in a five-part documentary set in Nottingham's Queens Medical Centre, which focuses on the hectic ward D57, the acute admissions ward. This ward appears to be the busiest ward in the hospital and it is shown to expose the dire state of the NHS. This programme is designed for older people as it is on fairly late at night "9PM" so it isn't made for children. This is because older people are funding the NHS and they have the right to vote. The programme makers try to get across numerous biased messages using editing techniques. It raises very serious points and the programme clearly wants the audience to develop a serious opinion about what and whom they see. ...read more.

We hear the creaky wheels of the trolley. At the beginning the literisation on the screen appears "Welcome to D57" and "Winter 2000" From the long shot down the corridor the camera then cuts and the audience is shown a very cramped room with the nurses wrapping up a corpse. The camera does a close up shot on the corpse's knee as staff wrap it up. The camera appears as though it isn't there and the older nurses in this scene are the only ones doing the talking. The nurses do come across more experienced as they are older and some even mentioned how many years experience they had. A few close ups of nurses were done but they never said much. Whenever a doctor talked to the camera the audience were always able to hear noises of equipment and phones. ...read more.

Mr Fones seems superior. He talks about how the work is all for the patient, " Health service is extremely slow". Anything Mr Fones says is less convincing, as we see no evidence of him being busy or rushed. He is also quite fat and this adds to the effect of him being relaxed and he even comes across quite lazy. We feel no sympathy towards him whereas we feel for the busy people on Ward D57. As the audience sees evidence of the busy atmosphere their opinions are against Mr Fones. Just after this the camera then returns to the busy ward and we see nurses running around, drinking coffee; unlike Mr Fones who manages to sit peacefully and drink his coffee. These are medium shots. The audience see how overstretched everyone is. The Staff face an "Insurmountable" workload and patients end up paying the price. The next issue we were shown was the lack of beds and trolleys in Ward D57 ...read more.