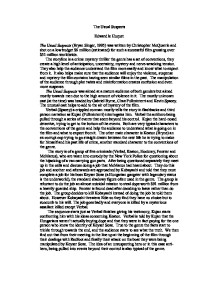 The Usual Suspects (Bryan Singer, 1995) was written by Christopher McQuarrie and shot on a low budget $6 million (estimated) for such a successful film grossing over $51 million worldwide.

The Usual Suspects Edward le Huquet The Usual Suspects (Bryan Singer, 1995) was written by Christopher McQuarrie and shot on a low budget $6 million (estimated) for such a successful film grossing over $51 million worldwide. The storyline is a crime mystery thriller the genre has a set of conventions, they create a high level of anticipation, uncertainty, mystery and nerve-wracking tension. They also help the audience understand the film more easily and know what to expect from it. It also helps make sure that the audience will enjoy the violence, suspense and mystery the film contains having seen similar films in the past. The manipulation of the audience through plot twists and misinformation creates confusion and even more suspense. The Usual Suspects was aimed at a mature audience of both genders but aimed mostly towards men due to the high amount of violence in it. The mostly unknown cast (at the time) was headed by Gabriel Byrne, Chaz Pullminterri and Kevin Spacey. The unusual cast helps to add to the air of mystery of the film. Verbal (Spacey) a crippled conman mostly tells the story in flashbacks and third person narration as Kujan (Pullminterri) interrogates him. Verbal the antihero being pulled through a series of events that seem beyond his control. Kujan the hard-nosed detective, trying to get to the bottom of the events. Both are very typical characters to the conventions of the genre and help the audience to understand what is going on in the film and what to expect from it. ...read more.

The interrogation is also heightened Kujan circling Verbal, starting to talk more loudly shouting questions and ideas towards him. Verbal becomes more and more confused and agitated, which has the effect of making the audience empathise even more with Verbal. Then Kujan says Keaton is Keyser Soze and with that starts listing reasons why he believes this to be true, with every reason Verbal replies no. This yet again has the effect of heightening the tension and builds us towards the anti-climax of the film. We find out Edie is dead killed by two bullets through the head Keyser's trademark way of killing. Still reinforcing the point and our feelings about Keyser, that he uses anyone and everyone. The audience now starts to believe Keaton is Keyser Soze, the shadowy semi-mythical figure often used in this genre. Kujan tells Verbal that Keaton had to get on that boat so he could make sure that the one man who could identify him as Keyser Soze was killed. Verbal starts to lose confidence in what he thinks he knows about Keaton and the events that he has been through. Keaton is now seen as Keyser Soze, the evil abstract shadowy force, the cause of all the menacing and often dangerous situations our anti-hero Verbal has been put through from the beginning of the film. The tension reaches a crescendo as the audience is told Verbal didn't actually see the killing of Keaton and he breaks down and cries. ...read more.

This use of an anticlimax is also typical of the genre and was used very well. Since as Verbal had been lying all the way through his interrogation, we are left unsure as to whether he is Keyser and whether any of the story is actually true ending the story with still unanswered questions which is also a technique often used by films of this type. The Usual Suspects is typical of the genre and uses conventions that the audience expect, the disjointed and complex storyline (typical of films of the time like Pulp Fiction and Reservoir Dogs) help build up the suspense and mystery the audience wants. Although it would be difficult to apply a cause-and-effect model to the film (due to the unreliability of Verbals testimony), it by and large conforms to it. The initial meeting leading to the jobs the group go on and then the anticlimactic resolution that Verbal is probably Keyser Soze. From the way Kujan finds out just to late to do anything about what he knows to the clich�d characters and the lack of answers until right at the end of the film the conventions are what the audience expects from a film of this genre and all add to the enjoyment and they also reinforce our recognition of the genre. They also help us understand that things will not always be as they seem and we wont know the story proper until the very end. 1,485 words. ...read more.