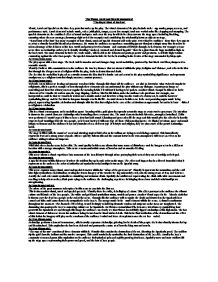 The Visual, Aural and Spacial elements of 'The Royal Hunt of the Sun'

The Visual, Aural and Spacial elements of `The Royal Hunt of the Sun' Visual, Aural and Spacial are the three key parts that make up the play. The visual elements of the play include make-up, masks, props, scenery, and performance style. Aural elements include music, voice (with pitch, tempo, accent for example) and non-verbal noise like clapping and stamping. The spacial elements are the combined effect of sound and space and cover the way in which the characters use the stage space including blocking, assessing where they are on stage (downstage right or left for example) and considering the relationship between objects on stage. "Royal hunt of the Sun" has many examples of how visual, aural and spacial elements add to the play. Peter Shaffer combines these three key aspects to create a visually beautiful theatrical performance. He wants the audience to experience something greater than just a simple story line therefore he takes advantage of the richness of the Inca world and portrays levels of status and contrasts of lifestyle through each element. For example act one scene three as Atahuallpa arrives, he is visually dazzling; `masked, crowned and dressed in gold.' There is a glow from the huge medallion high on the back wall. ...read more.

Act One (scene three): This is a visual extravaganza as the medallion opens beaming with a gold glow that spreads across the stage to create twelve great rays. The attention is drawn to the central character Atahuallpa who is standing above everyone else. The aural elements include his voice, strangely formalised. If this were performed I would expect it him to have a slow but bold sound. Chanting and great cries fill the stage and this would give the effect he is heavily respected and worshipped by the Inca people, as he is not involved with any type of chant. This amazing spectacle display of colour, space and sound brings excitement and the audience is not only introduced to a different type of lifestyle and religion, they are also aware of the power Atahuallpa holds. Act one (scene four): The stage is filled with the sound of vocal and alarming tropical bird cries as the Indians are trying to avoid being captured. This immediately represents fear and a strong sense of panic. Silence quickly follows this and the contrast between the two atmospheres will leave an effect on the audience raising tension and suspense. Act one (scene five): Wild bird cries echo the scene before this. ...read more.

The drumming also portrays the Inca's contrasting culture to the Spaniards. As Pizzaro crowns himself he lets out a victorious cry symbolising how powerful the Spaniards are and through this image the audience can clearly see that Pizzaro has selfishly ripped Atahuallpa of his high status. The last visual element of this scene leaves the audience being focused on the blood stained cloth. This is the final realisation of the destruction and the effect of this is that the imagery will play on the emotions of the audience's mind and leave clear pictures once the act has ended. Act two (Scene one): Atahuallpa performs a lament in monotone, which aurally expresses Atahuallpa grieving for the death of his people. He is also visually shown tied up and bloodstained. This emphasises he has been defeated and portrays the contrast of how the king was and now is. Act two (Scene six): "The rape of the sun" contains all three elements within it. Visually this contains the destruction of the set. Showing the Spaniards greed. The soldiers rip the gold from the Indians and the sun is torn apart. This could semiotically symbolise the final destruction of the Inca life. Aurally the Inca's constantly scream ad groan this emphasises to the audience their physical pain and rapidly growing death rate. Spatially more and more soldiers fill up the stage space representing their power and greed, and the loss of Inca people. ...read more.