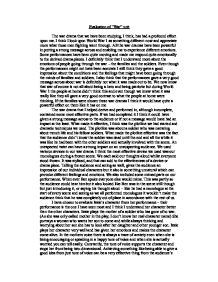 The war drama that I helped derive and performed in, although incomplete, contained some most effective parts. If we had completed it I think it could have given a strong message across to the audience

Evaluation of "War" unit The war drama that we have been studying, I think, has had a profound effect upon me. I think I look upon World War 1 as something different now and appreciate more what those men fighting went through. All the war dramas have been powerful in putting a strong message across and enabling me to experience different emotions. Some performances have been quite moving and made me respond quite emotionally to the derived drama pieces. I definitely think that I understand more about the emotions of people going through the war - the families and the soldiers. Even though the performances might not have been accurate I still think they gave a good impression about the conditions and the feelings that might have been going through the minds of families and soldiers. I also think that the performances gave a very good message across about war is definitely not what it was made out to be. We now know that war of course is not all about being a hero and being patriotic but during World War 1 the people at home didn't think this and even though we knew what it was really like they all gave a very good contrast to what the people at home were thinking. ...read more.

I think the most effective device we used was our monologues during a frozen scene. We each said our thoughts aloud whilst everyone stood frozen. It was stylised, and that can add to the effectiveness of a device or drama piece. Telling the audience and acting as well, gives the audience an impression of our individual characters but it also is something unnatural which can provoke different feelings and emotions. We also included some mimed parts on our performance. When ever Ben spoke everyone else would mime. This was partly so the audience could hear him but it also looked like Ben was in the scene still though but just introducing it, or saying his thought aloud - like he had a monologue at the start of every scene and seeing as we all performed monologues it wouldn't make the audience think that he was completely out of place in accordance with the rest of us. I have chosen to evaluate Izzie's character from her performance - their performance is the one I have seen most and I think I understand her character better then the other characters. ...read more.

Simple things like body language can make an audience understand more about that character. As I have mentioned previously the main emotion of this character is apprehension and anxiety. This is clear in all the actions and tone of voice constantly throughout the performance. She doesn't just depict her emotions through a plotline and what is said. Izzie has created a powerful character whose emotions can be felt by the entire the audience. She is very much a character that can be empathised with easily - simply because of how she makes the character so understandable and clearly shows what's running through her mind. One of the main reactions from the audience is sympathy - especially when the character finds out her son Is dead. Izzie acts this very well and creates an extremely powerful impact upon the audience - and she only says one line - "he writes very nicely". Immediately from that point her pretence she has put on for her children becomes very obvious and the character suddenly appears now as a mother with no one to turn to or to express her true emotions to. This is what makes Izzie's character such a powerful, emotional and memorable one. ...read more.