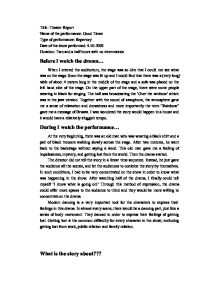 Title: Theater Report Name of the performance: Good Times Type of performance: Repertory Date of the show performed: 4-10-2003 Duration: Two and a half hours with no intermission Before I watch the drama... When I entered the auditorium, the stage was so dim that I could not see what was on the stage. Soon the stage was lit up and I could find that there was a (very long) table of about 4 meters long in the middle of the stage and a sofa was placed on the left hand side of the stage. On the upper part of the stage, there were some people wearing in black for singing. The hall was broadcasting the 'Over the rainbow' which was in the jazz version. Together with the sound of saxophone, the atmosphere gave me a sense of relaxation and drowsiness and more importantly the term "Rainbow" gave me a message of Dream. I was wondered the story would happen in a house and it would have a relatively sluggish tempo. ...read more.

Since the story was made up of four little stories, it was very difficult to say who the main character was. Three of the four stories had their endings. I deduced that the central character was in the one with no ending. The main character was a woman at about early twenty. She was an interviewer of the 'Good times'. This story had three characters. One was the boyfriend of the interviewer who was a businessman, being very selfish and materialistic. Another was an old classmate of the interviewer who was a doctor. Although the interviewer had a boyfriend, the doctor still took care of her very much. The interviewer left her boyfriend since she had found that her boyfriend did not care her feeling at all. Finally, she left the two men and spent all her time on her work. The message of the drama is very simple. It is the stress and the loneliness of the people living in city. ...read more.

The director prepared some songs with changed lyric to tell the latecomers that they were wrong but the punctual audience would wait for them. The lyrics were so interesting that the period was not boring at all. What should have done better??? Maybe due to the religious background of the drama, almost every character had a great change at the end of the drama. But it was so dramatic that the audience could hardly believe that it was a real story. Apart from music, lighting was one of the effects that the director used for expressing his ideas. But the effect was not good at all. The main drawback was that the overall stage was not bright enough. As such, the facial expression of the actors was difficult to observe. I had tried to look carefully about the facial expression but in vain. I do think that the facial expression sometimes is far more important than the lighting. In order to have a better performance, the director should have a better balance between lighting and facial expression. ...read more.