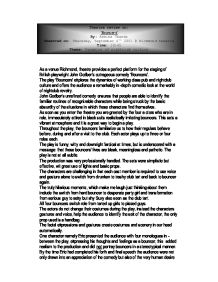 Theatre review on: 'Bouncers' By: Azmina Thanda Observed on: Thursday, September 6th 2001 @ Richmond theatre Time: 19:45 Theme: Dynamics of nightclub culture As a venue Richmond, theatre provides a perfect platform for the staging of British playwright John Godber's outrageous comedy 'Bouncers'. The play 'Bouncers' explores the dynamics of working class pub and nightclub culture and offers the audience a remarkably in-depth comedic look at the world of nightclub revelry. John Godber's unrefined comedy ensures that people are able to identify the familiar routines of recognizable characters while being struck by the basic absurdity of the situations in which these characters find themselves. ...read more.

The characters are challenging in that each cast member is required to use voice and gesture alone to switch from drunken to trashy club tart and back to bouncer again. The truly hilarious moments, which make me laugh just thinking about them include the switch from hard bouncer to desperate party girl and transformation from serious guy to sexy but shy Suzy also seen as the club tart. All four bouncers switch role from tarted up girls to pissed guys. The actors do not change their costumes during the play, instead the characters gestures and voice, help the audience to identify the sex of the character, the only prop used is a handbag. ...read more.

and upwards, their age gave us an instant impression that they were to be serious and well behaved which is a stereo typical image of middle aged men, but to our astonishment they began dancing like ballerina's and little boys and ways in which we would not have expected, this left the audience gob smacked and began the suspense, as we as audience felt we were unable to guess what was going to happen next. Overall, 'Bouncers' is a play where the audience has a role to play, as our sympathy is required and our opinion, which is conveyed by our laughter and facial expressions. Despite the heavy-handed approach to the theme, it is an entertaining way to spend a couple of hours. ...read more.