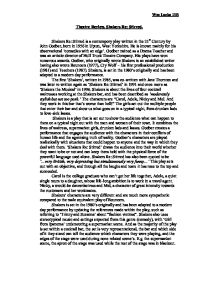 Theatre Review. Shakers Re: Stirred. Shakers Re: Stirred is a contempory play written in the 21st Century by John Godber, born in 1956 in Upton, West Yorkshire. He is known mainly for his observational 'comedies with an edge'. Godber trained as a Drama Teacher and was an artistic director of Hull Truck Theatre Company. His plays have won numerous awards. Godber, who originally wrote Shakers is an established writer having also wrote Bouncers (1977), Cry Wolf - his first professional production (1981) and Teechers (1987). Shakers, is set in the 1980's originally and has been adapted to a modern day performance. The first 'Shakers', written in 1985, was co-written with Jane Thornton and was later re-written again as 'Shakers Re: Stirred' in 1991 and once more as 'Shakers the Musical' in 1996. Shakers is about the lives of four cocktail waitresses working at the Shakers bar, and has been described as 'moderately stylish but not too posh.' The characters are "Carol, Adele, Nicky and Mel. And they work in this bar that's worse than hell!" The girls act out the multiple people that enter their bar and show us what goes on in a typical night, from drunken lads to love-sick lasses. ...read more.

that they may be different people but at the end of the day, they are all working to the same job and commitment. Along with the tray the characters each have a notebook, in which to take orders. A towel is used to clean the "tables" in the play, but it could have multiple representations as to how they use it. They could wring the towel to show anger to the person they are conversing with or they could fiddle with the towel to physically show that they are thinking about something that's bothering them. Certain areas of the stage were used to portray different characters that the actors played. The main part of the play was played in the centre of the area. But as the play progressed the wings were used, stage right to show a bathroom and stage left to show a street corner and the apron of the stage for the supermarket. Each scene was performed with varying degrees of charisma, from boredom to drunkenness, with high effectiveness. The lighting used was extremely successful as it captured the moments. E.g. monologues were always executed in spotlights and nearly always centre stage, highlighting the issue to the audience and capturing their attention. ...read more.

Mel was wearing a backless top, this could mean that she is confident with the front she putting on to show that she is confident and strong, but really she's covering half of her story up - behind her. The audience is then told a monologue by Mel, which proves this to correct, that she had an abortion. Nicky, however is wearing a low cut top. This could represent that although she wants to be out there she's still hiding something aswell, not ready to reveal all. This is shown in her monologue too, with her audition to dance on a cruise and having to go "topless" But being fearful about it. The low cut top could be a way to being given a little push in the right direction - or maybe it's a confident boost. The use of music was extremely effective to the play as it helped set the mood of the piece, e.g. Robbie Williams was played into the Topshop scene, which is quite lively and happy, but at the end of Mel's monologue a quite mournful song was used because of her having an abortion. I thought this was amazingly effective coupled with the acting as well. All different styles of music were used throughout Shakers from chart music from today to music that is slightly older. Wes Locke 13B ...read more.