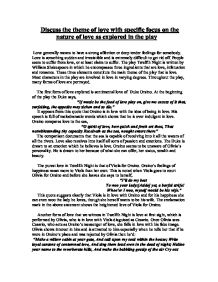 
Love generally means to have a strong affection or deep tender feelings for somebody. Love is something sudden and irresistible and is extremely difficult to get rid off. People seem to suffer from love, or at least claim to suffer. The play Twelfth Night is written by William Shakespeare in which he encompasses three ingredients that are love, infatuation and romance. These three elements constitute the main theme of the play that is love. Most characters in the play are involved in love in varying degrees. Throughout the play, many forms of love are portrayed.


The first form of love explored is sentimental love of  Duke Orsino. At the beginning of the play the Duke says,
“If music be the food of love play on, give me excess of it that, surfeiting, the appetite may sicken and so die.”
It appears from this quote that Orsino is in love with the idea of being in love. His speech is full of melodramatic words which shows that he is over indulgent in love. Orsino compares love to the sea,
“O spirit of love, how quick and fresh art thou, That notwithstanding thy capacity Receiveth as the sea, nought enters there”
The comparison documents that the sea is capable of receiving into it all the waters of all the rivers. Love also receives into itself all sorts of passion and emotions. The Duke is drawn to an emotion which he believes is love. Orsino seems to be unaware of Olivia’s personality. He is drawn to her because of what she can offer, her status, wealth and beauty.

The purest love in Twelfth Night is that of Viola for Orsino. Orsino’s feelings of happiness mean more to Viola than her own. This is noted when Viola goes to court Olivia for Orsino and before she leaves she says to herself,
“I’ll do my best
To woo your lady:[Aside] yet, a barful strife!
Whoe’er I woo, myself would be his wife.”
This quote suggests clearly thatViola is in love with Orsino and for his happiness she can even woo the lady he loves, though she herself wants to be his wife. The exclamation mark in the above statement shows the heightened love of Viola for Orsino.

Another form of love that we witness in Twelfth Night is love at first sight, which is performed by Olivia, who is in love with Viola disguised as Cesario. Once Olivia sees Cesario, who acts as Orsino’s messenger of love, she falls in love with his fake image. Olivia shows interest in him and is attracted to him especially when he tells her that if he were in Orsino’s place and was rejected by Olivia then he’d:
“Make a willow cabin at your gate, And call upon my soul within the house; Write loyal cantons of contemned love, And sing them loud even in the dead of night; Halloo your name to the reverberate hills, And make the babbling gossip of the air Cry out ‘Olivia’ ! O, you should not rest Between the elements of air and earth, but you should pity me.”
In the above quote the image of nature is encapsulated and these lines spoken by Viola to Olivia have actually moved Olivia. Disease imagery is used in the speech when Olivia realizes that she is completely in love with Cesario:
“Even so quickly one may catch the plague?”

There is a prominent love triangle in the play as Orsino loves Olivia, Viola loves Orsino and Olivia loves Viola disguised as Cesario.

However, in the middle of the play we get an indication that the play will end on a happy note and all the lovers will get their beloveds. This is indicated in one of Feste’s song:
“O mistress mine! Where are you roaming?
O! stay and hear ; your true love’s coming,
That can sing both high and low.
Trip no further, pretty sweeting;
Journey end in lovers meetings
Every wise man’s son doth know.”

Other than the three kinds of love mentioned above, there is also true friendship in Twelfth Night which is considered to be a form of love and it is between Antonio and Sebastian. Antonio is ready to risk everything, including his life to be with Sebastian. When Sebastian leaves for the city where the Duke’s court is situated leaving Antonio behind, he is surprised to see Antonio in one of the public streets of that city. Antonio declares that he has followed Sebastian because of his fear that some mishap or injury might befall Sebastian in that city. This shows Antonios’s true friendship towards Sebastian whereas, we get to know that even Sebastian cares for Antonio, when he says:
“Antonio, O my dear Antonio,
How have the hours racked and tortur’d me,
Since I have lost thee!”

According to some critics, the relationship between Antonio and Sebastian can be considered as homosexual.

Besides this, there is also an element of filial love in the play which is found in Olivia who has decided to mourn for the death of her brother, for seven years and is also present between Viola and her brother Sebastian who are set apart after a shipwreck and think that the other one is dead but still live with the hope of reuniting one day.

Lastly, there is a mention of self-love whose victim is Malvolio. Malvolio’s love is not love at all. He wants to marry Olivia so that he may be pronounced as Count Malvolio and not because he has any genuine passion for her. He suffers from self-love and is sufficiently punished for it. He is neither sentimental like the Duke nor impulsive like Olivia. His love is more materialistic than romantic.

Summing up all the above forms of love, we can analyze that the theme of love is the most dominant in the play be it romantic love, friendship, filial love and unrealistic and self-love. However, by exploring different aspects of love we find that love is a very complicated thing and confusion often occurs. Therefore, we can say that Shakespeare has very artistically handled these various forms of love and has made them a part of the nature of his characters which is quite realistic and appealing. Nevertheless, he has proved his mastership in crafting the play which is highly applaud able.