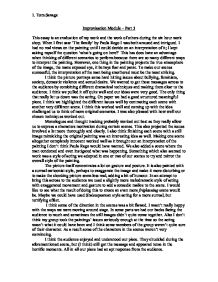 This essay is an evaluation of my work and the work of others during the six hour work shop on 'The family' by Paula Rego.

Improvisation Module - Part 3 This essay is an evaluation of my work and the work of others during the six hour work shop. When I first saw 'The family' by Paula Rego I was both amused and intrigued. I had no real views on the painting until I could decide on an interpretation of it; I kept asking myself the question 'what's going on here?' This has does have an advantage when thinking of different scenarios to perform because there are so many different ways to interpret the painting. However, one thing in the painting projects the true atmosphere of the image, the mans exposed eye, it betrays fear and panic. To make our scenes successful, the interpretation of the man being smothered must be the most striking. I think the picture portrays some hard hitting issues about bullying, feminism, society, domestic violence and sexual desire. We wanted to get these messages across to the audience by combining different dramatical techniques and making them clear to the audience. I think we pulled it off quite well and our ideas were very good. The only thing that really let us down was the acting. On paper we had a good structured meaningful piece. I think we highlighted the different issues well by contrasting each scene with another very different scene. ...read more.

As a result some of the characters in the scenes weren't very convincing. I think the audience enjoyed and understood our piece. They chuckled during the aforementioned scene, but (I think) still got the message and appeared tense in the horrific moments. All in all our piece had an apt response from the audience. I particularly enjoyed a part of a performance by another group. They performed one scene without dialogue, entirely in mime. It could have been done better, but it was a very clever idea. The painting itself manages to adorn a narrative without the use of words or language and so to did this groups piece. The 'John and Rachael' story is a gripping and thought provoking tale of love, jealousy and murder. It is a great plot for a dramatic piece and the scope for the characters and the techniques you can use are endless. It all depends on how you approach it. We chose to follow the story in chronological order and used what we felt were key parts of the story as a basis for each scene. Again there needs to be certain issues that we must project to the audience, but stay true to the story and the personalities of the characters as much as we can. ...read more.

There is one scene I thought needed a lot of work. We chose to use the part of the story where John tells Rachael he has cancer. I think it was a boring interpretation of a scene which has a lot of potential. There was little in the way of device or technique and the whole thing was a bit of a clich� in its dialogue in the acting. Also I don't really think we got the mental age difference we were so keen on across well enough, in fact sometimes Rachael seem less impressionable than John. The audience was silent throughout our piece. I think they appreciated the tension in our performance and really felt terror John could inflict. They understood our perception of the characters and why we had chosen the parts of the story we had. I was really interested by one groups idea to have the basis of the piece be John being interviewed by the police and then having flash backs between each section of interview. I liked for its originality you could slowly see events unfold as John begins to crack and eventually confess. I found it truly gripping and felt they had captured the mental anguish John must have gone through and the essence of the story. 1. Tom Savage ...read more.