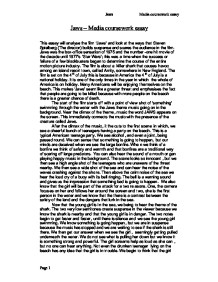 This essay will analyse the film 'Jaws' and look at the ways that Steven Spielberg (The director) builds suspense and scares the audience in the film.

Jaws - Media coursework essay This essay will analyse the film 'Jaws' and look at the ways that Steven Spielberg (The director) builds suspense and scares the audience in the film. Jaws was the box-office sensation of 1975 and the number-one hit movie of the decade until 1977's 'Star Wars'; this was a time when the success or failure of a few blockbusters began to determine the course of the entire motion picture industry. The film is about a killer shark that causes havoc among an island resort town, called Amity, somewhere in New England. The film is set on the 4th of July this is because in America the 4th of July is a national holiday. It is one of the only times in the year in which the whole of America is on holiday. Many Americans will be enjoying themselves on the beach. This makes 'Jaws' seem like a greater threat and emphasises the fact that people are going to be killed because with more people on the beach there is a greater chance of death. The start of the film starts off with a point of view shot of 'something' swimming through the water with the Jaws theme music going on in the background. Near the climax of the theme, music the word JAWS appears on the screen. This immediately connects the music with the presence of the creature called Jaws. After the climax of the music, it the cuts to the first scene in which, we see a cheerful bunch of teenagers having a party on the beach. This is a typical American teenage party. We see alcohol, and even a joint, being passed round. We can sense that something is going to happen, but our minds are deceived when we see the large bonfire. When we think of a bonfire we think of safety and warmth and that bonfires are a traditional way of scaring off large predators. ...read more.

This tells us that something is very wrong and creates even more suspense with the audience. We immediately assume that it has been attacked by the shark. We then know something is going to happen when we see a point of view shot of something underneath the water looking up at a pair of legs. We then hear the 'Jaws' theme getting faster as the point of view shot moves closer and closer to the pair of legs. This dramatic effect makes the audience aware that the shark is near and creates tension. We then see a point of view shot of Brody, who sees the attack in the distance. Again we do not see the see the shark, but at this point in the film we are sure that it is a shark that is attacking these people. Brody realises what is happening and a push pull shot (Created when a camera moves away from the actor but zooms in at the same time) focuses on his reaction to what is happening. This camera effect visually displays the confusion and panic that is going on in Brody's head. Brody runs to the water as fast as he can to try and evacuate the people in it. There is a general panic with parents rushing into the water to carry there children away. After the panic has calmed and everyone is stood in shock a single mother rushes to the front of the crowd looking for her son, but he is no where to be seen. At this point there is absolute silence as the yellow Lilo, the boy was playing on, is washed up on the shore and the woman is stood there in absolute shock. Although we did not consciously perceive these things, we saw red and white tents in the background as red is a sign of death, the victims mother was wearing black obviously symbolising death and the young boy was riding a yellow Lilo meaning caution. ...read more.

When the shark came by again Brody managed to force a gas canister into its mouth. We learnt earlier on from Hooper that if they ever got pierced they would give a large explosion. Brody finds a gun and makes his way to the mast of the ship trying to stay above water. After several shots at the sharks mouth he manages to hit the gas canister, (But not before saying 'die you son of a...). This created a massive explosion in which the sharks skin and guts were thrown everywhere and the rest of the shark gradually sinks to the bottom but as this happens we see bubbles rising to the surface. It puts the audience in suspense thinking that the shark is back, and that it really is invincible, but to everyone's surprise Hooper comes afloat and we all realise that he did indeed survive the attack. He managed to escape the cage and make his way to the sea bed with out the shark knowing. Our fears, suspensions and tensions fade away as we all know that it is now over. The final scene is of Hooper and Brody sailing off into the distance using one of the barrels afloat after the shipwreck. I think that the scariest scene in the film is the first attack. We have no idea what is out there, it is on a night and we are not prepared for what is going to happen. It emphasises the fact the in reality no one is safe. A cheerful young bunch of teenagers enjoying themselves and it turns out that within all of the safety surrounding them there will always be some kind of danger no matter how hard you try and protect yourself. This was also similar in the other two attacks. I think this is the meaning of the film and that everyone can learn a lesson from it. ?? ?? ?? ?? Jaws Media coursework essay Page 1 ...read more.