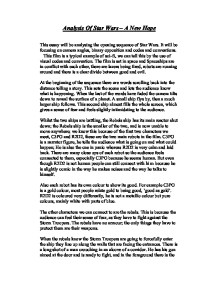 This essay will be analysing the opening sequence of Star Wars. It will be focusing on camera angles, binary opposition and codes and conventions.

Analysis Of Star Wars - A New Hope This essay will be analysing the opening sequence of Star Wars. It will be focusing on camera angles, binary opposition and codes and conventions. This film is a typical example of sci-fi, we can tell this by the use of visual codes and convention. The film is set in space and Spaceships are in conflict with each other, there are lazers being fired, robots are running around and there is a clear divide between good and evil. At the beginning of the sequence there are words scrolling back into the distance telling a story. This sets the scene and lets the audience know what is happening. When the last of the words have faded the camera tilts down to reveal the surface of a planet. A small ship flys by, then a much larger ship follows. This second ship almost fills the whole screen, which gives a sense of fear and feels slightly intimidating to the audience. Whilst the two ships are battling, the Rebels ship has its main reactor shut down; the Rebels ship is the smaller of the two, and is now unable to move anywhere; we know this because of the first two characters we meet, C3PO and R2D2, these are the two main robots in the film. ...read more.

As the door is broken down a large cloud of smoke forms, Storm Troopers appear out of the cloud, and start shooting almost instantly. The Rebel the audience made eye contact with is shot, with a quick close up on his face you see him open his mouth as if to yell out in pain. When many of the Rebels are dead and the rest have run away down the corridor the Storm Troopers just walk over them as if they don't care. Showing that these people are evil and have no feelings for others. Further down the corridor the Storm Troopers catch up with the run away Rebels, once again there is more shooting. C3PO and R2D2 are at the side of the screen with the rebels at one end of the hallway and the Storm Troopers at the other end firing at each other. C3PO and R2D2 walk hurriedly across the hallway without being hit. The camera follows the robots half way across then stops and looks down the corridor at the Storm Troopers. The side of the corridor has been hit; a large cloud of smoke fills the passageway. As the smoke clears a little, a tall, dark figure emerges, Darth Vader, when he arrives on the scene the Troopers stand to attention. ...read more.

R2D2 is now in the Pod and is waiting for C3PO to enter, but he refuses, although when he is shot at, he changes his mind. There is then a medium shot of him hurrying into the Escape Pod. As the Pod is jettisoned it starts spiralling down to a planet. The spiralling shows confusion between the robots and the Rebels and maybe shows a sense of panic. There is a distant shot of the ship through the Pod window; it looks as if that is spiralling too. The camera cuts to outside the Pod; from here it is very clear that the Pod is spiralling down almost out of control. It fades into the distance until it can't be seen. Cutting between characters is sometimes quite rapid in a time of panic of confusion. It's used to show different emotions in the same situation. The camera angles in the film are varied to show different feelings and emotions. For example, when Darth Vader is introduced the camera is tilted up to show he is tall and powerful. Colouring is also very clear, right from the time the audience board a ship it is clear which ship they are on, this is because of the robots colouring and the humans' clothes. The robots are decorated with friendly colours, white, blue and gold, and the humans' clothes are plain with no armour. ...read more.