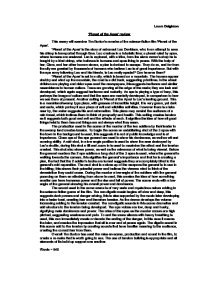 This essay will examine Tim Burton's remake of the science-fiction film 'Planet of the Apes'.

Laura Deighton 'Planet of the Apes' review This essay will examine Tim Burton's remake of the science-fiction film 'Planet of the Apes'. 'Planet of the Apes' is the story of astronaut Leo Davidson, who in an attempt to save his chimp is transported through time. Leo crashes in a futuristic time; a planet ruled by apes, where humans are enslaved. Leo is captured, with a tribe, from the slave owner's shop he is bought by a kind chimp, who believes in humans and apes living in peace. With the help of her; Clara, and her other human slaves, a plan is devised to escape. They do so, and far from the city are greeted by thousands of humans who believe Leo is of great importance. But with the ape army following Leo and his friends, is Leo really special? Can he save them? 'Planet of the Apes' is set in a city, which is based on a mountain. ...read more.

This setting creates tension as it suggests both good and evil and the effects of each. It signifies the idea of how all good things twist to them has and things are not always what they seem. The production used in the scene of the murder of the two soldiers by their leader in the swamp land creates tension. To begin the scene an establishing shot of the 3 apes with the town in the background is used, this suggests it is not of public knowledge and is of importance. Close-ups of the ape general are used to show his dominance, as well as wit and cunning ability. A mid-shot, in a low angle position is used to show the area destroyed by Leo's shuttle, during this shot a tilt and zoom in is used to maximise the effect and the tension created. This shot also shows power, as well as the relevance of what is being viewed. ...read more.

As the drama develops the volume increasing adding to the tension created. The non-digetic sounds in this scene dramatise and add structure to the tension being developed. The ape voices are low, deep and husky, signifying male dominance and power. The cries of the apes as the murder occurs are high pitched, suggesting weakness and pain. To end the scene silence with heavy breathing is used, this can immediately create or denote the ending of the danger, in this case it means the later, and creates the impression that all is over and at peace again. The digetic sound in this scene add to the tension by creating sounds that have familiar meaning to the audience, creating the correct fear from them. Overall Tim Burton has used the mise-en-scene, production and sound in the film, to create a re-make that is worth going to see. The use of tension building is appropriate and all elements of its build-up support one another. Words = 840 ...read more.