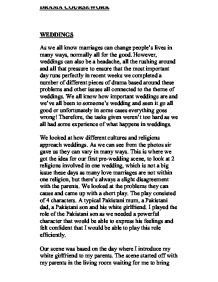 This is where we got the idea for our first pre-wedding scene, to look at 2 religions involved in one wedding, which is not a big issue these days as many love marriages are not

DRAMA COURSEWORK WEDDINGS As we all know marriages can change people's lives in many ways, normally all for the good. However, weddings can also be a headache, all the rushing around and all that pressure to ensure that the most important day runs perfectly in recent weeks we completed a number of different pieces of drama based around these problems and other issues all connected to the theme of weddings. We all know how important weddings are and we've all been to someone's wedding and seen it go all good or unfortunately in some cases everything goes wrong! Therefore, the tasks given weren't too hard as we all had some experience of what happens in weddings. We looked at how different cultures and religions approach weddings. As we can see from the photos sir gave us they can vary in many ways. This is where we got the idea for our first pre-wedding scene, to look at 2 religions involved in one wedding, which is not a big issue these days as many love marriages are not within one religion, but there's always a slight disagreement with the parents. We looked at the problems they can cause and came up with a short play. The play consisted of 4 characters. A typical Pakistani mum, a Pakistani dad, a Pakistani son and his white girlfriend. ...read more.

It really touched my heart and showed that weddings mean a lot, they bring together not only two bodies but two souls, they give a very important name to a relationship and give the people involved more responsibility as they must now care for another person as well as themselves. In this scene we had to make use of this wedding blessing and had to include as much of the following to make this an adequate piece: * The use of costume and or makeup * The use of sound and or music * The use of lighting * The use of space and or levels * The use of set and or props * The use of movement. Mime and or gesture * The use of voice * The use of spoken language In this scene I played the role of the bride, I had a very important role and had to spend a good amount of time on my script, costume, use of voice, movement, and gesture. I had to consider every movement that I made. The main story behind our play was, a girl who is marrying a guy purely for his money, she tells the best women this secret and expects her to keep it to herself however when the wedding is nearly done and the bride and groom are to make all their vows the best women spills the beans! ...read more.

With the first scene we did I got the chance to show that weddings don't always be just about the approval of the girl and boy involved, the wedding brings together not two people but two families and so the approval of families is important and can be a big issue when there's religious or cultural differences. The next scene we did showed that I had an understanding of how to convince as convincing people around weddings can be a difficult job, I showed that sometimes parents have to compromise just for there child's happiness. The last scene showed that weddings aren't always a good thing and people do have evil minds they go to any extent for money, things like the wedding blessing have a true deep meaning but if used in a wrong way the blessing can turn to a curse! As a whole I got to learn a lot of things whilst working on these scenes. I now look at weddings in a more mature way and always wonder how many things will have gone wrong in lead to this one day! Weddings are important in a persons life and now I understand this whole issue to why people plan their weddings out months in advance! I also got the chance to work with different people and see what their views were towards marriage! The whole coursework was difficult but a fun at the same time which left me with a lot more knowledge on weddings! ...read more.