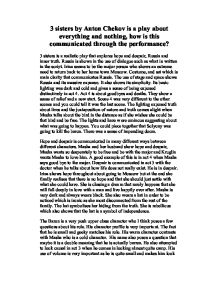 Three sister Anton Chekov analysis and review of a performance.

3 sisters by Anton Chekov is a play about everything and nothing, how is this communicated through the performance? 3 sisters is a realistic play that explores hope and despair, Russia and inner truth. Russia is shown in the use of dialogue such as what is written in the script. Irina seems to be the major person who shows an extreme need to return back to her home town Moscow. Costume, and set which is main clarity that communicates Russia. The use of stage and space shows Russia and its massive expanse. It also shows its simplicity. Its basic lighting was dark and cold and gives a sense of being exposed distinctively in act 4. Act 4 is about goodbyes and deaths. They show a sense of relief and a new start. Scene 4 was very different to the other scenes and you could tell it was the last scene. The lighting exposed truth about lives and the juxtaposition of nature and truth comes alight when Masha talks about the bird in the distance as if she wishes she could be that bird and be free. ...read more.

His character profile is very important. The fact that he is small and geeky matches his role. His warm character contrasts with Masha who is a cold character. His name also poses a question that maybe it is a double meaning that he is actually barren. He also attempted to look causal in act 3 when he comes in looking almost quite camp. His use of volume is very important as he is quite small and makes him look like he wants to be noticed. His super objective is to get Irina to marry him but at the end he finally comes to the conclusion that it's only for security not love. He wishes so desperately for Irina to love him. He is one of the most engaging characters as he made me interested in what he was saying and he was quite amusing. Mark Theodor playing Soloyony was also another actor I found very engaging. ...read more.

People kept arriving. You could see the relation ships between the characters quite clearly even in the first 20 minutes. The most interesting thing about the play was the use of space and set. Although it was simplistic it helped communicate where they were. There was a good use of sound. What I found most astounding was the way they used the microphones to highlight certain sounds. For example, the use of boiling the kettle. This was very clever. Not only the use of the microphone, but the use of science that came with it. It was almost like time could not go on until the kettle was boiled. Also when the doctor was upstairs alone drunk, this was significant moment in the play that shaped how he felt of life. What he felt his purpose was and that how do we know if people even exist and that there not just a figure of everyone's imagination. They incorporated the use of the microphone when he washed his face with water from the bowl. At this point he showed a complete emotional downfall. ...read more.