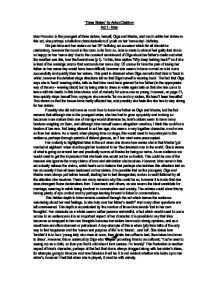 'Three Sisters' by Anton Chekhov Act 1 - Irina Irina Prozorov is the youngest of three sisters, herself, Olga and Masha, and much unlike her sisters in this act, she portrays a definitive characterisation of youth on her 'name-day'- birthday. We join Irina and her sisters on her 20th birthday, an occasion which for all should be celebratory, however the mood in the room is far from so. Irina is made to almost feel guilty that she is so happy on her 'name-day' due to the constant reminiscent of Olga about her father's death and what the weather was like, how the funeral was (p1). To this, Irina replies 'Why keep harking back?' as if she is tired of the nostalgic aroma that surrounds her name day. Of course for Irina the pain of losing her father on her name-day would have been difficult; however she seems to have moved on a lot more successfully and quickly than her sisters. This point is stressed when Olga remarks that Irina is 'back in white', however the detailed stage directions tell us that Olga herself is wearing back. The fact that Olga says she is 'back' wearing white, tells us that Irina must have grieved for her father (in the appropriate way of the era - wearing black) ...read more.

It is possible to say that Irina becomes so wrapped in her own thoughts because her sisters have such strong opinions, and as a result hers are often shunned or patronised. A key example of this is when (p5) Irina talks of the only way to find happiness and the 'sense and purpose of life' is to 'labour...and toil'. She states how 'terrible' it is to be a 'young lady who rises at noon, then drinks her coffee in bed, then takes two hours to dress'. However, this is undercut by Olga who 'laughs' provoking Irina to an outburst; 'You're used to seeing me as a child, so then you find it odd when I look serious. I'm twenty!' This frustration is another aspect of Irina's character, perhaps at the fact that she is always dragged along with her sister's ideas, for example, going to Moscow and how fabulous it will be. It is not evident whether she looks up to her sister's, however I feel that when she is played, it must be with naivety. Her youthful exuberance and 'free-spirit' would mean Irina would need to be acted more animatedly than the other characters. Her pace in speech I feel must be faster in this act than the other characters and her wistful imagination would be shown through many different facial expressions and gestures. ...read more.

Although she has her own, very different burdens from her sisters to carry, constant looks of anxiety would portray a different message to the audience. It is essential that the faraway looks are due to her imagination and not because she has other things on her mind. Perhaps when she is talking to Tusenbach, when she starts to cry, this scene would be played with intense emotions to show that sometimes, she does look to the past but has learnt to persevere for the sake of her sisters. As they have always had to mother her, she feels as if they should not have to all the time now, and in her own way wishes to protect them. Another scene to highlight her strength and maturity is the first, when Olga is told to stop 'harking back'. This would need to be played with an exasperated tone as the audience get the impression Olga is constantly recollecting about their dead parents and Irina only wants to look forward, instead of living in the past. The audience will feel that Irina has had to grow up quickly with the troubles she has experienced, and desperately wishes to place it all behind her and move on. That is the main portrayal of Irina to the audience that she wants to move on. ...read more.