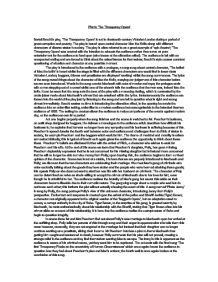 Plot in 'The Threepenny Opera' Bertolt Brecht's play, 'The Threepenny Opera' is set in nineteenth-century Victorian London during a period of great corruption and poverty. The play is based upon central character Mac the Knife along with different characters of diverse status in society. The play is often referred to as a great example of 'epic theatre'; 'The Threepenny Opera' was created with the intention to educate the audience rather than serve as pure entertainment for the audience to feed upon (also known at the alienation effect). The audience is left with an unexpected ending and are forced to think about the raised issues for themselves; Brecht's style causes constant questioning of situation and character at any possible moment. The play is introduced to the audience with a prologue, a song sung about central character, 'The ballad of Mac the knife' is heard whilst the stage is filled with the different characters one would find in lower-class Victorian London; beggars, thieves and prostitutes are displayed 'working' whilst the song commences. The lyrics of the song reveal things about the character of Mac the Knife, swaying our judgement of this character before we are even introduced. Words in the song convict Macheath with acts of murder and rape; the prologue ends with a man stepping out of a crowd whilst one of the whore's tells the audience that the man was, indeed Mac the knife. ...read more.

At this, Mac takes his leave and scene two begins. It is in the beginning of this scene that we are introduced to Jenny; Mrs Peachum is instructing her to turn Macheath in to the authorities. Jenny has her doubts that Mac will show up at the brothel but is reminded that he is 'A mighty genius stuck on prostitution'; as predicted Macheath enters the brothel where the girls are working. We become known that Mac is a regular visitor at the whorehouse, highlighting the significance of sex and how it remains as a driving human force. We can only guess that Brecht includes this force as sources suggest that he had many partners and liked to experiment himself. The girls laugh as Jenny reads his palm, foreshadowing her inevitable betrayal, making crude comments throughout. The rough nature of the whores portray another social cast in the play, the whores make the audience feel uneasy but allow them to become aware of Victorian society. Jenny leaves the house to find the authorities to betray Mac; the whores are left listening to a song which Mac sings about his past with Jenny. It is in this song that the audience becomes aware of Jenny's reasoning to rat out her past lover as the song's lyrics reveal Mac's physical abuse of Jenny. This song gets the audience to query their liking of Macheath but remain fairly swayed with his natural charm despite his violence. ...read more.

Whilst the audience prepare themselves for the action, Peachum suddenly steps out of character and begins to talk to the audience, exclaiming that the play will be ending differently announcing that a royal official will now appear on his horse. This royal official has with him an order from the Queen announcing that Macheath is reprieved. The official can be looked at as a 'deus ex machina' which is a Latin term literally meaning 'God out of the machine'; this device was used in ancient Greek theatre where a 'God' would be lowered to the stage using a machine, this God would solve all the problems occurring at the time, in this case Macheath's death penalty. The 'deus ex machina' used in this play is very raucous due to the loose ends that had been tied by the characters, such as Lucy forgiving Macheath, this conclusion seemingly spelt out imminent death for Macheath, but the audience is mistaken. The play comes to an end with a final speech from Peachum who delivers a final moral. Brecht takes a very unfamiliar approach as Peachum's words force the audience to not become caught up in the emotion of Macheath's freedom, he asks the audience to accept the happy ending which in real life would have been seldom. Peachum's final words make the audience leave the play considering the issues that arose throughout 'The Threepenny Opera'. ...read more.