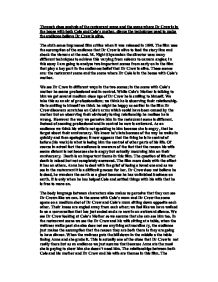 Through close analysis of the restaurant scene and the scene where Dr Crow is in the house with both Cole and Cole's mother, discus the techniques used to make the audience believe Dr Crow is alive.

Through close analysis of the restaurant scene and the scene where Dr Crow is in the house with both Cole and Cole's mother, discus the techniques used to make the audience believe Dr Crow is alive. The sixth sense impressed film critics when it was released in 1999. The film uses the assumption of the audience that Dr Crow is alive to feed the story line and shock the viewers at the end. M. Night Shyamalan the director uses many different techniques to achieve this varying from colours to camera angles; in this essay I am going to analyse two important scenes from early on in the film that play a key part in the audiences belief that Dr Crow is alive. These scenes are: the restaurant scene and the scene where Dr Cole is in the house with Cole's mother. We see Dr Crow in different ways in the two scenes; in the scene with Cole's mother he seems professional and in control. While Cole's Mother is talking to him we get several medium close ups of Dr Crow he is smiling to himself. We take this as an air of professionalism; we think he is observing their relationship. ...read more.

There are bits of dialogue that also play a part in making us believe that Dr Crow is alive. Dialogue is potentially one of the things that could hinder our belief in Dr Crow being alive. If no body ever seems to be talking to him it could easily seem they do not know he is there, to over some this clever techniques are used. In the restaurant scene Anna does not say anything throughout the scene to Dr Crow for most of it. We assume she is angry with him for being late and being so involved in his work although as an audience we might become suspicious if she says nothing at all throughout the whole meal. At the end of the meal just before she stands and leaves she says 'happy anniversary' which makes us believe that she is just angry at him and trying to make him feel bad for being so late and self absorbed on their anniversary. Another bit of dialogue that makes us assume Dr Crow is alive is at the end of the scene with Cole's Mother when she says 'you got an hour'. Although she is actually just telling Cole when dinner will be it seems to the audience that she is leaving them for an hour to have their first session. ...read more.

The camera angles help us build on this belief. The scene opens on a medium shot of Cole's mother and Dr Crow this makes us think that they are sitting talking because it is showing us both of them at the same time. The door becomes the central focus of the shot, this makes the audience anticipate Cole is going to come through the door and assume that he is what they are waiting for. As the door opens the medium shot stays even though Cole's mother gets up to greet Cole. This is another thing that could be taken as a clue that Dr Crow is not alive, however the audience just thinks that Cole's mother is understandably very worried about her son. It is understandable that the audience believes that Dr Crow is alive; as generally when you see someone walking along a street you understand them to be alive. These assumptions are built on with the help of camera angles, dialogue, body language and the ways characters and their situations are presented to us. Although we are given subtle hints that at the end we look back on as flashbacks and realised we have been deceived. The film ends when Dr Crow himself begins to believe Cole and finally realises much to the audience's shock that he himself is a ghost. Caitlin Devereux ...read more.