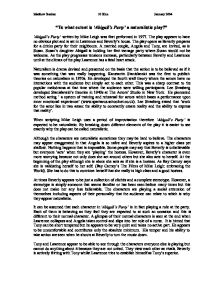 "To what extent is 'Abigail's Party' a naturalistic play?" 'Abigail's Party' written by Mike Leigh was first performed in 1977. The play appears to have no obvious plot and is set in Lawrence and Beverly's house. The play opens as Beverly prepares for a drinks party for their neighbours. A married couple, Angela and Tony, are invited, as is Susan. Susan's daughter Abigail is holding her first teenage party where Susan would not be welcome. As the play progresses tensions increase, particularly between Beverly and Lawrence until at the climax of the play Lawrence has a fatal heart attack. Naturalism is drama devised and presented on the basis that the action is to be believed as if it was something that was really happening. Kanstantin Stanislavski was the first to publish theories on naturalism in 1870s. He developed the fourth wall theory where the actors have no interactions with the audience but simply act to each other. This was a sharp contrast to the popular melodrama at that time where the audience were willing participants. Lee Strasberg developed Stanislavski's theories in 1940s at The Actors' Studio in New York. He pioneered method acting ' a system of training and rehearsal for actors which bases a performance upon inner emotional experience' (www.spartacus.schoolnet.co.uk). Lee Strasberg stated that 'work for the actor lies in two areas: the ability to constantly create reality and the ability to express that reality'. When scripting Mike Leigh uses a period of improvisation therefore 'Abigail's Party' is expected to be naturalistic. ...read more.

Angela reveals that her house cost �22,000 and this confirms that time period. Another clue that the play is set in the 1970s comes from the cars they talk about. Tony says he has an Escort, which was the popular everyday car of that time. Lawrence drives a Mini which a more stylish car in the 1970s. The final aspect, which distinguishes the play as being in the 70s, is the sexism. Whilst the characters are discussing cars Angela reveals that Tony will not let her drive. This is another detail that makes the makes the play naturalistic. The set and choice of music add to the atmosphere of 70s naturalism. Naturalism is also obvious in the staging. 'Abigail's Party' was written to be performed on a proscenium arch stage, as it is most naturalistic. A proscenium arch stage allows the decoration of three walls and furnished as if it were a real house. This uses the theory of naturalism as developed by Kanstantin Stanislavski and the audience assumes there is a fourth wall. This is an impenetrable wall between the stage and audience. This means the audience merely observes the play and the actors are acting to each other and never to the audience. This creates a naturalistic play. The only aspect of staging that could be considered to be slightly false is the way all the furniture is placed for easy visibility through the 'fourth wall'. However, in most houses the furniture in the living room is centred round the television so that if we assume that the television would separate the stage and audience then it becomes more naturalistic again. ...read more.

. If it was not a naturalistic play the heart attack would be used to make a dramatic climax but it is more realistic as it is attempting to represent a view of real life. Overall it can be said that 'Abigail's Party' is naturalistic. There is no plot and the entertainment comes from the observations of daily life. People cannot watch themselves when they are entertaining but if they could then it would possibly have the same cringing result. 'Abigail's Party' captures the difference between people's 'entertaining' selves and 'normal' selves perfectly. It focuses on how drama can occur in the most normal circumstances. The play may not be entirely and completely believable in places. Lawrence's heart attack to Beethoven's Fifth Symphony could be unbelievable but heart attacks are an everyday risk and can occur at any time. Angela had warned earlier in the play that people with heart problems are businessmen with highly stressful jobs. The fact he dies to Beethoven's Fifth Symphony may seem corny but was his choice of music and he was extremely stressed. Also Tony may seem hard to believe because all he does is reply in monosyllables when spoken to but his wife is behaving foolishly and he really does not want to be there. This makes his antisocial attitudes less surprising. In general although some parts may initially seem unbelievable but considered within the scenario most of these aspects appear much more believable. Therefore 'Abigail's Party' is a naturalistic play in virtually every aspect. ?? ?? ?? ?? Matthew Barden 10 Blue January 2004 ...read more.