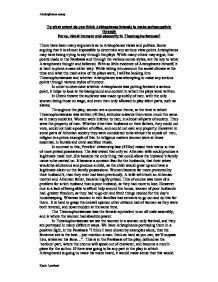 To what extent do you think Aristophanes intends to make serious points through farce, visual humour and obscenity in Thesmophoriazusae?

To what extent do you think Aristophanes intends to make serious points through Farce, visual humour and obscenity in Thesmophoriazusae? There have been many arguments as to Aristophanes views and politics. Some arguing that it is almost impossible to determine any serious view points Aristophanes may have being trying to say through his plays. While many others may argue, that points made in the Parabasis and through the various comic styles, are the key to what Aristophanes thought and believed. With so little evidence of Aristophanes himself, it is hard to prove a case either way. While taking into account the social climate at the time and what the main aims of the plays were, I will be looking into Thesmophoriazusae and whether Aristophanes was attempting to make any serious points through various styles of humour. In order to determine whether Aristophanes was putting forward a serious point, it helps to look at the background and context in which his plays were written. In Greek theatre the audience was made up solely of men. with the only women being those on stage, and even then only allowed to play silent parts, such as slaves. Throughout the play, women are a common theme, at the time in which Thesmophoriazusae was written (411bc), attitudes towards them were much the same as in many societies. Women were inferior to men, in almost all parts of society. They were the property of men. ...read more.

midst, the women turn to the only stranger among them Mnesilochus, and question him on what happened last year "why we drank...we drank some more [first woman] someone's been telling you!" immediately assuming the women drank last festival as that is all women do. According to Aristophanes. "she is the bane of all mankind, except the tavern keeper" highlighting just what men thought of women drunks. Mnesilochus only slips up in his interrogation when assuming that women could not have been drinking for the whole festival, and talks about someone having to use a basin because of a lack of a jerry, when should he have said 'drinking' would probably have been correct and been done with interrogation. One of the main themes of the play is Euripides' attempts to redeem him self, after becoming the scourge of womankind, by portraying them in a less than appealing light. What is funny though is that while they are denying all this to the outside world, when Mnesilochus stands up and says "and what about that trick of chewing a bit of garlic in the morning, when you've had a bit of fun?" what's most curious is that they never once deny it. They are portrayed as scheming, adulterous and liars and cheats, yet they never say that they do not do these things. This is subconsciously implying that in fact they do, that they are scheming adulterous and liars and cheats, and only a little annoyed that someone has found this out. ...read more.

He is seen as sexist an ignorant of the theatre) and so no obvious conclusions could have been brought from it, though again as with Euripides it would be most likely that this has little meaning. The main reasons for comedies to exist was because they were designed to entertain, to make people laugh. Politics was a food for comedy and it was often that parodies of large figureheads, such as Euripides, and allegorical figures, such as Echo, were used in order to poke fun. Most of the points brought up in Thesmophoriazusae would have been most likely just there for comic effect rather than anything serious This also means that it is hard to determine the reality from the absurd (something Aristophanes uses a lot in his plays) and so determine serious points from those attempting to just poke fun and make the audience laugh. And it is for this reason that it is almost impossible for us to determine what it was Aristophanes was attempting to say, if anything at all. Even if it were possible to pull out points from the play, the likelihood is that Aristophanes did not mean them to be taken seriously, all visible points mirror the social climate of the times, they could possibly be his own view points, but this is highly unlikely. His plays were not designed to be political messages, his plays were designed to amuse, through farce visual humour and obscenity. Aristophanes essay Katie Lambert ...read more.