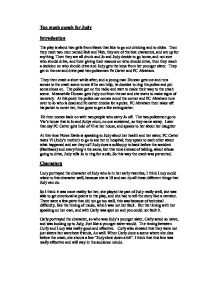 Too much punch for Judy Introduction The play is about two girls from Essex that like to go out drinking and to clubs. Then they meet two men named Bob and Nob, they are of the box characters, and are up for anything. Then they are all drunk and Jo and Judy decide to go home, and not sure who should drive, and their giving their reasons on who should drive, then they reach a decision on who should drive and Judy gets the keys from her younger sister. They get in the car and drive past two policemen Pc Carter and PC Abraham. They then crash a short while after, and a young man Duncan gets out and runs across to the crash scene to see if he can help, he decides to ring the police and put some shoes on. The police get on the radio and start to make their way to the crash scene. Meanwhile Duncan gets Judy out from the car and she starts to make signs of recovery. At this point the police car comes round the corner and PC Abraham runs over to Jo who is dead and Pc carter checks for a pulse. ...read more.

That made it really funny. Also he had to lead the lines between him and Matt, which is more responsibility. His acting techniques like timing, tableaux's and projection was good and everyone in the audience could see what he was doing clearly the whole time. Matt portrayed the character of nob. He is basically the same as bob but more, if he has not got bob, He will feel he's got nothing. He is bobs sidekick, Matt played this character well, because eh was replaces and enjoyed being Nob, this helped because it gave it some energy which finished off on Bradley. The only thing that could need an improvement is his articulating with his words top makes it a bit clearer. Lauren played Duncan, but we changed it to be a female part instead. Lauren is only really in one section, but she does most of the speaking in this part. Lauren tells the story and she says that she did not want to involved, and you could see this from her face and body language. But she did not want to be there. Also most of there lines were spoken to the audience, and she was telling it like she was there, and not telling it like she was telling how it was. ...read more.

Body Language. The body language from all the characters was good, but one character showed more of it, and I felt it was Elliot, This was because eh he showed that he had some authority and that he is calm and focussed, as the character, also when he was caring when Jusy is in the wheelchair, he showed that he was comforting her. This stood out for me, because of the authority he showed during the play. Facial Expressions I could see that every expression on their characters faces, looked real. Judy showed that they were having a laugh and are relaxed by smiling and raising her eyebrows, this made it really clearly. Charlotte showed when she was shocked and you could see that she did not understand and was shocked at what was being said. Everyone showed how their characters should of reacted with their facial expressions. Conclusion In conclusion to this, there's always something to learn, and I think this one is, if you take a big risk you are more likely to come out much, much worse. The play as a whole went well, but at the very end where we say the facts, a few people stumbled at their lines, I think this was because they had switched off, and thought it was over before it was. ...read more.