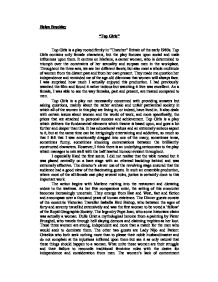 Top Girls is a play rooted firmly in &quot;Thatcher&quot; Britain of the early 1980s.

Helen Brockley "Top Girls" Top Girls is a play rooted firmly in "Thatcher" Britain of the early 1980s. Top Girls contains only female characters, but the play focuses upon social and male influences upon them. It centres on Marlene, a career woman, who is determined to triumph over the constraints of her sexuality and surpass men in the workplace. Throughout the three acts, we see her different facets, but also meet a whole multitude of women from the distant past and from her own present. They made me question her independence and reminded me of the age-old dilemmas that women will always face. I was surprised how much I actually enjoyed this production. I had previously watched the film and found it rather tedious but watching it live was excellent. As a female, I was able to see the way females, past and present, are treated compared to men. Top Girls is a play not necessarily concerned with providing answers but asking questions, mainly about the rather archaic and unfair patriarchal society in which all of the women in this play are living in, or indeed, have lived in. ...read more.

The action begins with Marlene rushing into the restaurant and dictating orders to the waitress. As her five companions enter, the setting of this encounter becomes increasingly uncertain. They emerge from East and West, fact and fiction and encompass over a thousand years of human existence. The Dinner guests consist of the eccentric Victorian Traveller Isabella Bird Bishop, who between the ages of forty and seventy travelled extensively and was the first woman to be voted a 'fellow' of the Royal Geographic Society. The legendry Pope Joan, who some historians claim was actually a woman. Dulle Griet a mythological heroine from a painting by Pieter Brueghel, who travels through hell slaying demons and claiming trophies as her loot. These three women are strong, independent and more than a match for the men who would seek to dominate them. The other two guests are Lady Nijo and Patient Griselda who both seek nothing more than to please their noble husband/master and do not complain at the injustices inflicted upon them but see it as only natural that these things should happen to a woman. ...read more.

I thought the kitchen was an appropriate setting to explore the role of women in a male dominated world. The Set Designer has designed a simple but effective set enhancing my enjoyment of the play. The first scene contains only a slowly revolving dinner table. In another scene there is only a washing line in the foreground and bare 'den' in the background. There are three desks for the office scene and just a dinner table and small kitchenette for another. These were uncomplicated sets that allowed my imagination to fill in the gaps. The cast of 7 all perform competently, but I think the retarded 'Angie' and 'Marlene' were particularly outstanding. Marlene commanded the stage throughout the entire performance with her unflagging energy and valid managerial drive. Doubling up as Isabella Bird and Marlene's sister Joyce "Sophie James" proves to be a doyen of characterisation eliciting both laughter and sympathy. Yet it is left to "Morag Siller" as Pope Joan to deliver the brilliant one-liners with a faint Scottish lilt that hits just the right note. This was a whirlwind of a production and, for my money, Top Girls deserves top marks for top entertainment. . ...read more.