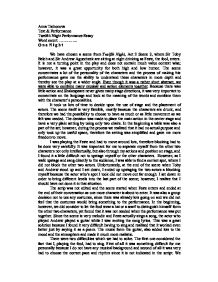 Anna Tichonova Text & Performance Twelfth Night Performance Essay Word count: .............. O n e N i g h t We have chosen a scene from Twelfth Night, Act 2 Scene 3, where Sir Toby Belch and Sir Andrew Aguecheek are sitting at night drinking as Feste, the fool, enters. It is not a turning point in the play and does not contain much value context wise; however, it was a great opportunity for both high and low humor. The scene concentrates a lot of the personality of the characters and the process of making this performance gave me the ability to understand these characters in more depth and thereby see the play at a wider angle. Even though it was a rather short abstract, we were able to combine many musical and action elements together. Because there was little action and Shakespeare never gives many stage directions, it was very important to concentrate on the language and look at the meaning of the words and combine them with the character's personalities. It took us lots of time to decide upon the use of stage and the placement of actors. The scene itself is very flexible, mostly because the characters are drunk, and therefore we had the possibility to choose to have as much or as little movement as we felt was needed. ...read more.

Since the scene is very melodic and Feste actually sings a song, the actor who played Andrew played a guitar while I was reciting the song lyrics. This was a great solution because I found it very difficult having to sing and realized that it worked even better just by saying it as a poem. The music form the guitar, also added lots to the mood and the atmosphere and made it much more realistic. There were two difficulties which we had to solve. The first one considered the fact that I, playing the fool, had to sing. First of all it was something difficult for me personally because I do not have any musical background and second of all it was very had to choose the correct pace and rhythm since it is not indicated in the script. We solved this problem by adding a guitar and while I had to sing, another character was playing a guitar, which worked very effectively and added correct atmosphere. This gave me the possibility to be more flexible with the singing and also recite the lyrics as a poem. The rhyme scheme of the lyrics was A, A, B, C, C, B and the guitar gave me some guide lines and also prevented it from being monotone. ...read more.

and therefore we looked at the sounds of the works and at their purpose very closely in order not to make it monotone, but more musical and pleasant to hear and absorb. My personal development throughout the play was very big and I feel that I gained lots of confidence and experience after this performance. When one takes such a short part from the play and literality takes it apart, it helps to understand the characters and therefore the entire content of the play. During this performance I was involved in some acting which I have never done before. We have practiced everything from drunk speeches and walks to singing to a guitar. I also had the experience of talking directly to the audience, which worked very effectively and playing a very complex character made me think lots about the intentions of his movements and works. One of the main difficulties which I faced were natural gestures. It was difficult for me to stay standing almost the entire time and particularly when I had to walk upstage and get closer to the audience. I realized later that some of the fiddling distracted the attention, since the movement of every singe finger must have an intention, otherwise the audience gets distracted for no reason. Seeing our performance on videotape, gave me the opportunity to see some of the aspects which I did not notice before. ...read more.