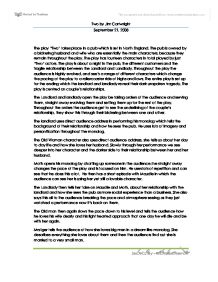 The play "Two" takes place in a pub which is set in North England. The pub is owned by a bickering husband and wife who are essentially the main characters, because they remain throughout the play. The play has fourteen characters in total played by just "Two" actors. The play is about a night in the pub, the different customers and the fragile relationship between the Landlord and Landlady. Throughout the play the audience is highly evolved, and see's a range of different characters which change the pacing of the play to a rollercoaster ride of highs and lows. The entire play is set up for the ending which the landlord and landlady reveal their dark unspoken tragedy. The play is centred on couple's relationships. The Landlord and landlady open the play be taking orders of the audience and serving them, straight away evolving them and setting them up for the rest of the play. Throughout the orders the audience get to see the underlining of the couple's relationship, they show this through their bickering between one and other. ...read more.

She describes everything she loves about them and then the audience find out she is married to a very small man. Mr Iger is a small cowardly man and is constantly pushed by Mrs Iger because of it. Throughout his scenes he is trying to get drinks but cannot because of his lack of height and courage until he finally flips and can't take it anymore, gets some drinks and Mrs Iger is not happy, when she sees how she angered him she takes it all back and shows her love for him. Smelly Jimmy is a strange character; he has no dialog yet makes a strong impact on the Landlord and Landlady, leaving the audience on a cliff hanging wondering what he said. The Landlord then informs the audience that time has passed and that he cares dearly about the profits of the pub unlike his wife. Roy is an abuse husband and Lesley his terrified wife, their scene is more about how dominant Roy is over a Lesley and how he treats and tries to control her. ...read more.

The Boy triggers the end scene between the Landlord and Landlady. His father has left him in the pub and the Landlady tries to help him out. The child's father comes back and the Landlady lets him go reluctantly showing the audience that there is she loves about the boy or about children. The row between landlord and landlady shows the two characters raw feelings about each other and how they never talked about the death of their son. The Landlady believes the Landlord blames her for the death because he closed off and didn't want to talk about it. Throughout the row the Landlord tries to still no talk and clean the bar while the Landlady frantically wants to talk about the passing to get it all out. Finally the landlord comes round and lets out his feelings about the death and they are finally free of the tension and pain built up inside them and between their relationships. The play finally finishes with the lines; Landlord: I love you. Landlady: I love you too. ?? ?? ?? ?? Two by Jim Cartwright September 21, 2008 Sean Carey - Drama Homework ...read more.