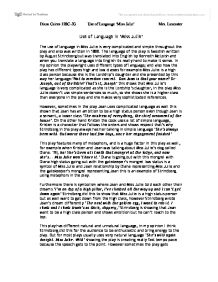 Use of language of Miss Julie

Use of Language in 'Miss Julie' The use of language in Miss Julie is very complicated and simple throughout the play and also was written in 1888. The language of the play is Swedish written by August Strindberg but was translated into English by Kenneth McLeish and when you translate a language into English its really hard to make it sense. In my opinion the playwright uses different types of language; and also how the play has different types high and low classes for example Miss Julie is a high class person because she is the Lordship's daughter and she presented by this way her language:'Not to mention conceit. Don Juan is that your name? Or Joseph, out of the Bible? That's it, Joseph' this shows that Miss Julie's language is very complicated as she is the Lordship's daughter, in the play Miss Julie doesn't use simple sentences so much, so she shows she is a higher class than everyone in the play and she makes very sophisticated references. However, sometimes in the play Jean uses complicated language as well this shown that Jean has an ambition to be a high status person even though Jean is a servant, a lower class 'The mistress of everything, the chief ornament of the house'. ...read more.

way up and I can't get down again' Strindberg did this to show that Miss Julie is a high status person but as well want to get down from the high class, however Strindberg wrote Jean's dream differently 'The nest with the golden egg, I want to rob it. I climb and I climb trunk's so thick, slippery,' Strindberg is showing that Jean want to be a high class person and shows ambition but he can't reach to the top. This play has different natural and unnatural language, in my opinion I think Strindberg did this for the audience to be enthusiastic and bring energy to the play. But for most plays usually uses very natural language 'She's wild again tonight. Miss Julie. Wild' showing the play is creating really fast tempo pace because the speech gets to the point. However sometimes the play gets unnatural with pauses and breaks between the sentences 'There was someone there: a pink frock, white stockings, it was you.' Poetic language is also used, where Miss Julie and Jean having a monologue 'See, your Ladyship, a dog can stretch out on your Ladyship's shoulder, a horse can feel your ...read more.

Kristin I think she speaks formal since she is a servant and have respect for Miss Julie. Strindberg thinks that the play should be continuous, so the story flows straight through because by having breaks it ruins the show and the audience won't understand the message of the play sometimes many won't understand what the play is about. One of my practical I did a part of the play where Kristen found out that Jean and Miss Julie had an affair, I was Kristen and when I played the scene I had to think proper way to say while I'm acting because there are so many ways to explore the language that's why language is so important. For my part as Kristin I was kind of using formal language there was no slang but also I was angry at the same time at Jean. I have to think about the tone of voice if I'm speaking formal and angrily at Jean and its really difficult seeing that this play is a naturalistic play. Diana Caires 12SC-JG Use of Language 'Miss Julie' Mrs. Lancaster ...read more.