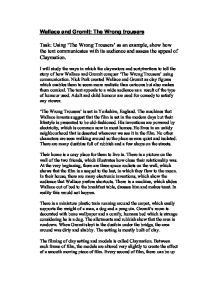 Using 'The Wrong Trousers' as an example, show how the text communicates with its audience and assess the appeal of Claymation.

Wallace and Gromit: The Wrong trousers Task: Using 'The Wrong Trousers' as an example, show how the text communicates with its audience and assess the appeal of Claymation. I will study the ways in which the claymators and scriptwriters to tell the story of how Wallace and Gromit conquer 'The Wrong Trousers' using communication. Nick Park created Wallace and Gromit as clay figures which enables them to seem more realistic than cartoons but also makes them comical. The text appeals to a wide audience as a result of the type of humour used. Adult and child humour are used for comedy to satisfy any viewer. 'The Wrong Trousers' is set in Yorkshire, England. The machines that Wallace invents suggest that the film is set in the modern days but their lifestyle is presented to be old-fashioned. His inventions are powered by electricity, which is common now in most homes. He lives in an untidy neighbourhood that is deserted whenever we see it in the film. No other characters are seen walking around so the place seems quiet and isolated. There are many dustbins full of rubbish and a few shops on the streets. Their home is a cosy place for them to live in. There is a picture on the wall of the two friends, which illustrates how close their relationship was. ...read more.

When Penguin comes into the story, he purposely distances Wallace and Gromit as part of the plan by taking Gromit's bedroom and playing music really loud. This leads to Gromit leaving home, which helps Penguin develop his plan. Personification is used when creating the character because penguins generally cannot operate electronically configured machinery such as 'The Wrong Trousers'. Also, they do not usually rob museums, or listen to music, or pretend to be chickens. The Wrong Trousers are also an important character because they assist Penguin to steal the diamond. Personification is not used to compare them to a person because the trousers are an inanimate object controlled by electronics and then Penguin. At the end 'The Wrong Trousers' walk off into the sunset, an example of unreality but also shows that they lived happily ever after. Old-Fashioned language is used throughout the film. The language is significant because it shows where and when it was set. Wallace speaks with a Yorkshire dialect because it seems more comical. Phrases such as 'tyke' and 'rascal' shows that he is from northern England and does not seem well travelled. Archaic terms show that he uses language typical of before his time. Wallace always tries to be courteous and uses polite phrases even when he had been locked in the cupboard by a penguin., 'Excuse me....'. ...read more.

The amount of unreality in the film should not be able to make it seem real although the audience will not rationalise because of the action. In the chase scene, with events happening so quickly, it is easy to not notice the unreality. There are various types of humour used in the film to make the audience laugh. There is adult humour, "A touch painful on re-entry, Gromit", when Wallace fell down into the trousers. The majority of humour in the film is aimed at a wide range of people, which made it suitable for family viewing. There were occasional moments of childish humour such as when Gromit gets squirted in the face with jam. The creator chose to make the film suitable for all by using different levels of humour to satisfy people of different personalities. He does this because he wants more people to enjoy the movie. In conclusion, the text communicates with the audience with the assistance of Claymation, musical backup, sound effects and humour as well as straightforward oral approach. Claymation is appealing to the creator because it can add comical value to the text and is effective in communicating action. The text is backed up by other devices to clarify the points and improve the level of communication via claymation, so that the movie is appealing to the audience. ...read more.