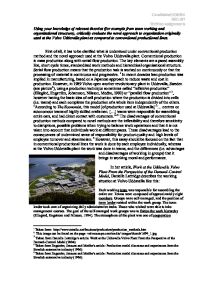 Using your knowledge of relevant theories (for example from team working and organisational structure), critically evaluate the novel approach to organisation originally used at the Volvo Uddevalla plant as compared to conventional productional lines.

Using your knowledge of relevant theories (for example from team working and organisational structure), critically evaluate the novel approach to organisation originally used at the Volvo Uddevalla plant as compared to conventional productional lines. First of all, it has to be clarified what is understood under conventional production method and the novel approach used at the Volvo Uddevalla plant. Conventional production is mass production along with serial flow production. The key elements are a paced assembly line, short cycle times, standardized work methods and hierarchical organisational structure. Serial flow production means that the production task is worked on continuously or that the processing of material is continuous and progressive. 1 In recent decades lean production was implied in manufacturing, based on a Japanese approach to reduce waste and cost in production. However, in 1989 Volvo open another revolutionary plant in Uddevalla, Sweden (see picture2), using a production technique sometimes called "reflexive production" (Elleg�rd, Engstr�m, Johansson, Nilsson, Medbo, 1992) or "parallel flow production"3, however having the basic idea of cell production where the production is divided into cells (i.e. teams) and each completes the production of a whole item independently of the others. "According to The Economist, this model [of production used at Uddevalla] "... centres on autonomous teams of highly skilled craftsmen. ...read more.

of mental ability, an ability to identify and adjust imbalances in the group, a strong plant that produces ideas for the team, a good coordinator that shows patience, command, seeks out ability and elicits trust and a range of team roles available to the group.11 The main benefit is said to be heuristic - there was individual effectiveness at Uddevalla; workers had the opportunity of discussing their own and other people's contribution to the team and therefore resolve performance and relationships issues which could create a barrier to overall effectiveness. All this was possible at the conditions under which workers were operating at Uddevalla, whereas workers in a flow production were not having this opportunity and therefore were not working as efficient since there was no chance of personal intervention. Another great contribution to effectiveness made possible by working in a team is by the presence of synergy. Synergy the idea of a team working together so well that it outperforms even its best member. Through the process of working together inferior contributions can be eliminated, errors out averaged and workers think more creatively.12 Another contributor is a process called reflexivity. West (1996) defined it as "the extent to which group members overtly reflect upon the group's objectives, strategies and processes and adapt them to current or anticipated circumstances. ...read more.

There are a lot more differences in these two production lines - much more that could be covered in a 2000 words essay. For example, in this essay the motivational aspect of simply working in a group was nearly completely ignored. However, "because assemblers at Uddevalla worked in groups, they had more opportunity to interact socially with their co-workers. Furthermore, Uddevalla workers reported more satisfactory "supervisor climate" and "relations with fellow workers" (Engstrom, Johansson, Jonsson, et al., 1995)".18 Furthermore, it was ignored that, "When compared to conventional assembly, Uddevalla work had some areas where lower demands were placed on workers, and other areas with higher demands. Serial-flow workers have higher demands in terms of assembly timing because a predetermined model paces their work. The tilting devices at the Uddevalla plant were created to maintain musculoskeletal comfort. Working on tilted cars places less physical demand on the workers compared to conventional assembly (Kadefors et al., 1996). On the other hand, psychological demand is greater: During the 100-minute cycle time, the Uddevalla assemblers completed significantly more tasks than conventional assemblers, and the tasks where varied and complex. Uddevalla workers reported more psychological workload than conventional workers, though they also reported more satisfactory "stimulus from the work itself" (Engstrom, Johansson, Jonsson, et al., 1995)."19 The main essence of the novel approach was the flattening of the organisational structure and the working in teams, which doesn't happen in conventional flow production lines. ...read more.