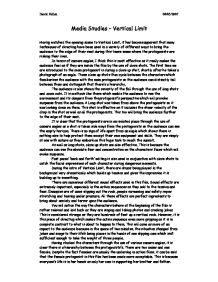 Media Studies - Vertical Limit Having watched the opening scene to Vertical Limit, it has become apparent that many techniques of directing have been used in a variety of different ways to bring the audience to the edge of their seat during this tense scene where the protagonists are risking their lives. In terms of camera angles, I think this is most effective as it really makes the audience feel as if they are inside the film by the use of close shots. The first time we are introduced to the main protagonist is during a close up shot, shortly after he takes a photograph of an eagle. These close up shots then cycle between the characters which familiarises the audience with the main protagonists so the audience can distinctly tell between them and distinguish that there's a hierarchy. ...read more.

There is no sign of life apart from an eagle which shows there is nothing else to help protect them except their own equipment and skills. They are simply at one with nature as they embark on this huge task to reach the summit. As well as long shots, close up shots are also effective. This is because the audience can see the absolute fear and concentration on the characters faces which will evoke suspense. Fast paced 'back and forth' editing is also used in conjunction with close shots to catch the facial expressions of each character during dangerous moments. During the intro of Vertical Limit, there are drums being played in the background very dramatically which builds up tension and gives the impression it is building up to something. ...read more.

This will come as more of an impact to the audience because in the space of two minutes, the situation changed from jokes and songs to their life's being places in the hands of one slipping cam which isn't sufficient enough to take the weight of three people. Having studied the characters through the use of various camera angles, it is clear there is a hierarchy between the protagonists's. There are two males and one female. Despite the fact females are usually the underdog in action films, it can be said that the female protagonist in this film has been made more acceptable. This is because everyone's life is in her hands as only her cam is supporting her brother and father. ?? ?? ?? ?? David Pollon 09/05/2007 ...read more.