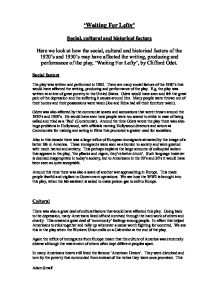 'Waiting For Lefty' Social, cultural and historical factors Here we look at how the social, cultural and historical factors of the 1920's and 1930's may have affected the writing, producing and performance of the play, 'Waiting For Lefty', by Clifford Odet. Social factors The play was written and performed in 1962. There are many social factors of the 1930's that would have affected the writing, producing and performance of the play. E.g. the play was written at a time of great poverty in the Untied States. Odets would have seen and felt the great pain of the depression and the suffering it causes around him. Many people were thrown out of their homes and their possessions were taken (Joe and Edna had all their furniture taken). Odets was also affected by the communist scares and accusations that were thrown around the 1920's and 1930's. He would have seen how people were too scared to strike in case of being called and tried as a 'Red' (Communist). Around the time Odets wrote the play there was also huge problems in Hollywood, with officials naming Hollywood directors and actors as Communists for making and acting in films that promoted a greater need for socialism. ...read more.

This helped to dishearten faith in the Government but more importantly the Institution the country was built on. Odet must have felt that the country he once loved was falling apart due to government control and foolish propaganda schemes. This would have affected the producing and performance of the play, as the director would have wanted the actors to be able to relate to the peoples troubles so as to reveal the realism behind the plot. The actors would have also wanted the audience to be as disgusted with the poverty as they were so would have conveyed certain points as explicitly as they could. E.g. make the rich characters appear fat and slobbish. Historical The main historical factor that would have affected Clifford Odet's writing of the play would have probably been World War 1. Although the war had finished quite some years before, there would have still been evident, the loss and death caused by it. Many people were widowed or orphaned due to World War One so the tragedy of the event would have remained with the people who felt it. ...read more.

I very much doubt that the audience would have even noticed the use of racist language in the play as it was so commonly used back then. As a direct result, actors performing the play nowadays would probably emphasize such phrases as 'Pollack's and niggers' so as to stir up emotions in the audience and to convey how racist some people back then were. From the position of a performer, I found it difficult to get into role as the characters in the play as their lives are so different to my own. Society as a whole has completely changed. The majority of characters in the play are uneducated, living in absolute poverty and can see no light at the end of their dark tunnel. They would have also seen the devastation caused by war and would fear any prospect of a future one. In comparison with today's society, which when confronted with a possible war in the Middle East only seems partially concerned or bothered by the prospect. It was for these reasons that I found it incredibly hard to relate to the lives of the 1920's characters. Adam Small ...read more.