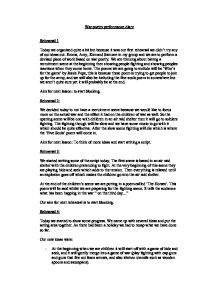 War poetry performance diary Rehearsal 1 Today we organized quite a bit but because it was our first rehearsal we didn't try any of our ideas out. Emma, Amy, Kim and Sam are in my group and we are to perform a devised piece of work based on war poetry. We are thinking about having a recruitment scene at the beginning then showing people fighting and showing peoples reactions when they come home. The poems we are going to include will be 'Who's for the game' by Jessie Pope, this is because these poem is trying to get people to join up for the army, and we will also be including the five souls poem in somewhere but we aren't quite sure yet it will probably be at the end. Aim for next lesson: to start blocking. Rehearsal 2: We decided today to not have a recruitment scene because we would like to focus more on the actual war and the effect it had on the children of war as well. So the opening scene will be one with children in an air raid shelter then it will go to soldiers fighting. The fighting though will be slow and we have some music to go with it which should be quite effective. After the slow scene fighting will die which is where the 'Five Souls' poem will come in. ...read more.

For our next rehearsal we would like to have five minutes to perform in a couple of rehearsals time. Rehearsal 9: We managed to finish blocking enough for five minutes today. After the part of the airplanes we just sit down talking until Sam decides that we should go and look for father. Everyone apart from Emma agrees with her and stands in a huddle on the opposite site of the shelter to Emma. This then displays an idea of Emma versus us, which is also like a war (English versus Germans). When Emma decides we should wear hats to stop our brains from exploding we use hats that certainly wouldn't stop our brains from exploding. Kim will be wearing a saucepan, and the rest of us will be wearing bobble hats. The weapons that we are going to use are rolling pins, wooden spoons and a cap gun. Our aim for our next rehearsal is to be ready to perform our five minutes performance. Rehearsal 10: Today we had to perform our five minutes performance. I think it went well considering Emma was away. Kim played her own part and Emma's which was obviously rather difficult for her. The comments we were given were: To include more poetry. To use more space at the front when we are fighting. ...read more.

We will think of how to correct this next lesson Rehearsal 18: We worked mainly on detail today and changed the parts that the teacher suggested we had a look at. We are going to keep the same starting positions for the poem but we won't walk around in a circle after each verse. Instead of this the person who previously spoke will change places with the person who is about to speak but how this is done changes every time someone else speaks. The person to speak will be pushed off the block that they are on and pushed to the floor which is where they will talk. This symbolizes the fact that they are pushed into being soldiers. Rehearsal 19: Today we thought of an ending. Once Amy finishes her part of the five souls poem (she is the last person to say it) we all step off of our blocks and form a line in front of the audience. Then guns are passed down the line and at the same time we point them towards the audience, this would hopefully make the audience feel threatened and we then repeat the chorus 'I gave my life for freedom. This I know. For those who bade me fight had told me so.' Then Sam goes back to the blocks and dies again and we all surround her and place a flag over her body. Rehearsal 20: ...read more.