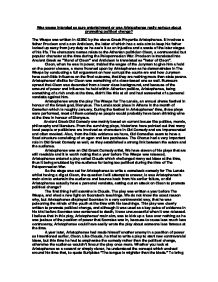 Was wasps intended as pure entertainment or was Aristophenes really serious about promoting political change?

Was wasps intended as pure entertainment or was Aristophenes really serious about promoting political change? The Wasps was written in 422BC by the above Greek Playwrite Aristophenes. It involves a father Procleon and a son Anticleon, the latter of which has a sole aim to keep his father locked up away from jury duty as he see's it as an injustice and a waste of the later stages of his life. The characters names relate to the Athenian politician Cleon, a contraversial but popular character at the time during the Peloponnesian War. Procleon is translated into Ancient Greek as "friend of Cleon" and Anticleon is translated as "hater of Cleon". Cleon, when he was in power, trebled the wages of the Jurymen to give him a hold on the poorer classes, a move frowned upon by Aristophenes as he demonstrates in The Wasps by conducting a full arguement on how corrupt the courts are and how Jurymen have such little influence on the final outcome, that they are nothing more than state pawns. Aristophenes' dislike for Cleon was something of a class-based one as well. ...read more.

A year later, Aristophenes had made himself another enemy in a position of power as I mentioned earlier, Cleon. Like Clouds, he tried to write a play to start new contraversial ideas, but this time he had to emphasise the comedy rather than the political change, otherwise the audience wouldn't favour the play once more. Whether you look at Aristophenes as a coward or simply clever, he understood the concept which evolved around his time that, to quote Euripides "The tongue is mightier than the blade." To bring down his foes and the people he disliked, rather than have them assasinated or start some kind of rebellion, putting his own neck on the line, he chose the much wiser option of insulting them in his plays infront of a mass audience. When in The Wasps, Procleon gets defeated in the arguement by Anticleon this is the clearest example that Aristophenes wants the audience to hate Cleon and to challenge his ideas. The chorus of the play are great fans of Cleon who they call "The Great Protector" after he trebled their pay, they show much loyalty to him, which is destroyed later on as they belive Anticleons arguement is much stronger than Procleons. ...read more.

In conclusion I believe that Aristophenes wrote this play to promote political change but watered it down so the audience would favour it. He knew that the audience expected a play to entirely go all gung-ho on insulting Cleon and making many cheap jokes at his expense. Aristophenes has clearly learnt from his past mistake with Clouds and this time concentrated on the formation of the play but nevertheless as I mentioned earlier, "The tongue is mightier than the blade" and Aristophenes still uses the play against Cleon no matter how indirectly he does it. But he does make a valid point near the end, summing up his own views that taking into account the play contains views of his own, that even though politics is corrupt and unfair, if you disrespect it, you get into trouble, the very way that Procleon does in the end, similar to the way Aristophenes did when he was taken to court after his production of "Knights" for defamation. If I had more time I could have expanded on the question and answered why does Aristophenes have a vendetta against Cleon and Soccretes, is it because they hold more power than he does, or does he genuinly disagree with their points of view and teachings. ...read more.