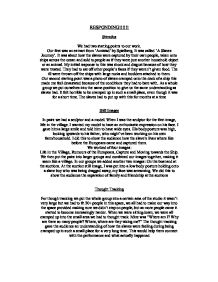 We had two starting points to our work.Our first was an extract from 'Amistad' by Spielberg. It was called 'A Slaves Journey'.

RESPONDING!!!!!! Stimulus We had two starting points to our work. Our first was an extract from 'Amistad' by Spielberg. It was called 'A Slaves Journey'. It was about how the slaves were captured by their own people, taken onto ships across the ocean and sold to people as if they were just another household object or an animal. My initial response to this was shock and disgust because of how they were treated. They had to eat off other people's faces if they weren't given food. The ill were thrown off the ships with large rocks and boulders attached to them. Our second starting point was a photo of slaves cramped onto the deck of a ship this made me feel devastated because of the conditions they had to bare with. ...read more.

We worked of four images: Life in the Village, Rumours of the Europeans, Capture and Moving towards the Ship. We then put the pairs into larger groups and combined our images together, making it seem like a village. In our groups we added another two images: On the boat and at the auctions. At the auction still image, I was put into a low body posture holding onto a slave boy who was being dragged away, my face was screaming. We did this to show the audience the separation of family and friendship at the auctions Thought Tracking For though tracking we put the whole group into a certain area of the studio it wasn't very large but we had to fit 20+ people in this space, we all had to make our way into the space provided making sure we didn't step on people, but as more people came it started to become increasingly harder. ...read more.

When he confronted the person who betrayed the village, he made himself higher than he should be, giving an impression of being large. When he shouted at him, his voice started off being very quiet upset 'why?', but as he carried on I got louder as he wanted to know why the person could do such a thing to his own people Narration Our narration was during our still images, it was to set the scene that our slaves were about to go into, one of our groups was "The Villagers have heard rumours of the Europeans, they're paranoid. They can't trust anyone...not even their own family." In our narration we used an echo on the words; Rumours, Europeans and Paranoid, This would give emphasis on the words, we did this so the audience could get a clear view of what was going to happen in the piece instead if not understanding what's going on. ...read more.