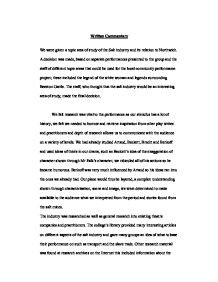 We were given a topic area of study of the Salt industry and its relation to Northwich.

Written Commentary We were given a topic area of study of the Salt industry and its relation to Northwich. A decision was made, based on separate performances presented to the group and the staff of different topic areas that could be used for the local community performance project; these included the legend of the white woman and legends surrounding Beeston Castle. The staff, who thought that the salt industry would be an interesting area of study, made the final decision. We felt research was vital to the performance as our stimulus has a lot of history, we felt we needed to borrow and retrieve inspiration from other play writes and practitioners and depth of research allows us to communicate with the audience on a variety of levels. We had already studied Artaud, Beckett, Brecht and Berkoff and used ideas of theirs in our drama, such as Beckett's idea of the exaggeration of character shown through Mr Falk's character, we ridiculed all of his actions so he became humorous. Berkoff was very much influenced by Artaud so his ideas ran into the ones we already had. Our piece would thus be layered, a complex understanding shown through characterisation, scene and image, we were determined to make available to the audience what we interpreted from the period and stories found from the salt mines. The industry was researched as well as general research into existing theatre companies and practitioners. The college's library provided many interesting articles on different aspects of the salt industry and gave many groups an idea of what to base their performance on such as transport and the slave trade. Other research material was found at research archives on the Internet this included information about the time period when the salt industry was at its peak, around the 1800s, and this was where I found the bulk of my research into the theatre companies, DV8 and V-Tol. ...read more.

They even seemed to have their own religious code that if broken would result in a complete avoidance of said person, to me it seems as if they are possessed, until they leave that mine." Thomas Marston, a member of the second generation of the great Northwich family of salt proprietors. Shown in our piece through the unity of all the miners and the exclusion of Mr Falks. When devising the piece we decided we needed to concentrate on the aspects of each art form to create a truly effective and interesting piece. We also tried to layer the art forms wherever possible to create an appropriate atmosphere. For example we devised a short dance that showed how much fun the workers actually had when they were "released" from the mine, it was a simple motif that was repeated and various movements were expanded to show our motif development but also keeping the action simple to reflect the movements of the actual miners. Throughout this we had the member of the group who played Mr Falks sat in the audience shouting various phrases such as, "Ignorant fools!" to show that none of this makes sense to the rich mine owner who simply longs for fun and love. Within the dance we featured several brief tableaux of images of jubilation expressed by the workers showing a complete contrast to the feelings felt within the mine. This shows our integration of dance, music and drama. Although we devised our piece early, my group and I had little time to rehearse due to absences; we could have planned our time better and arranged more out of lesson rehearsals. However some of the techniques we used follow: We allocated each member of the group to be responsible for one thing, for example music or lighting and made a decision to go for less rather than more. One member was responsible for finding all the music to go with the dance sections and found this very successfully, another was responsible for costumes and making sure that everyone brought in what they were meant to. ...read more.

I think the incorporation dynamics within sections made the piece visually interesting and the audience seem to particularly enjoy the "out of work" dance which was effective and powerful because of the sharp dynamics, good action links and the variation of dance and drama. We received extremely good feedback from the audience. They seemed to really enjoy all aspects of the piece and most importantly understood the message we were trying to convey. After the final performance, our aims set out in the beginning of the module seemed to have been achieved. We aimed to inform and educate but still entertain our audience about the salt industry in Northwich and after reviewing what the audience said it seems we have accomplished this. Specific feedback has included: "The opening of the piece was attention grabbing, the narration using the bible and a poem was really good and the story was clear and interesting." Another person comments; "The contrasts between the scenes was good, there was a clear structure and it was a fluid performance." This illustrates that the piece was easy to watch and understand, a key area we addressed back in the devising process. I think the audience reacted in this way because we thought long and hard about specific decisions relating to proxemics, tension, character, physicality and dialogue knowing that these would make the drama interesting to an audience. We were keen to work in a physical way, using stylised structures in our exploration, our final piece showed this and so our excitement for the piece reflected upon the audience. Overall we worked with commitment and courage to create a piece of theatre that I felt was thrilling to watch and I am extremely proud of what we produced. We consciously explored new ways of expressing ideas in theatre language. We taught and learnt from each other and were always ambitious and dedicated. These aspects are as important as talent when producing drama I felt this combined effect shaped our drama and made it successful. ...read more.