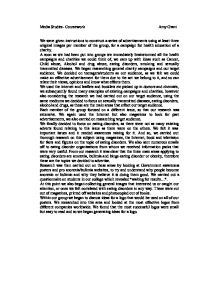 We were given instructions to construct a series of advertisements using at least three original images per member of the group, for a campaign for health education of a charity.

Media Studies- Coursework Amy Grant We were given instructions to construct a series of advertisements using at least three original images per member of the group, for a campaign for health education of a charity. A soon as we had been put into groups we immediately brainstormed all the health campaigns and charities we could think of, we cam up with ideas such as Cancer, Child abuse, Alcohol and drug abuse, eating disorders, smoking and sexually transmitted diseases. We began researching general charity campaigns and our target audience. We decided on teenagers/students as our audience, as we felt we could make an effective advertisement for them due to the act we belong to it, and so can relate their views, opinions and know what effects them. ...read more.

Each member of the group focused on a different issue, so that our research was extensive. We again used the Internet but also magazines to look for past advertisements, we also carried on researching target audience. We finally decided to focus on eating disorders, as there were not as many existing adverts found relating to this issue as there were on the others. We felt it was important issues and it needed awareness raising for it. And so, we carried out thorough research on this subject using magazines, the Internet, book and television for facts and figures on the topic of eating disorders. ...read more.

We carried out a questionnaire on students in our college which revealed *waiting for results...*. At this point we also began collecting general images that interested us or caught our attention, or ones we felt correlated with eating disorders in any way. These were cut out of magazines, printed off websites and photocopied out of books. Within our group we began to discuss ideas for a logo that would be used on all of our posters. We researched into this area and looked at the most effective logos from different companies worldwide. We found that the most successful logos were small but easy to read and so we began generating ideas for a logo. ...read more.