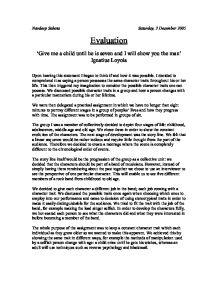 We were then delegated a practical assignment in which we have no longer than eight minutes to portray different stages in a group of peoples' lives and how they progress with time. The assignment was to be performed in groups of six.

Navdeep Sahota Saturday, 3 December 2005 Evaluation 'Give me a child until he is seven and I will show you the man' Ignatius Loyola Upon hearing this statement I began to think if and how it was possible. I decided to comprehend it as saying a person possesses the same character traits throughout his or her life. This then triggered my imagination to consider the possible character traits one can possess. We discussed possible character traits in a group and how a person changes with a particular mannerism during his or her lifetime. We were then delegated a practical assignment in which we have no longer than eight minutes to portray different stages in a group of peoples' lives and how they progress with time. The assignment was to be performed in groups of six. ...read more.

We discussed the possible traits once again when choosing which ones to employ into our performance and came to decision of using stereotypical traits in order to make it easily distinguishable for the audience. We tried to fit the trait with the job of the band, for example making the lead singer selfish. In order to develop the characters fully, we hot-seated each person to see what the characters did and what they were interested in before becoming a member of the band. The whole purpose of the assignment was to keep a constant character trait which each individual as they grow older so we wanted to make this apparent. We achieved this by showing the same trait in different ways, for example the methods of manipulation used by a selfish person change with age: a child cries until he gets his wishes, whereas an adult will use techniques such as reverse psychology and blackmail. ...read more.

I feel this was one of the strongest elements of drama used in the piece and was very successful. The piece as a whole was successful; however after questioning the audience it seems some parts of the play were ambiguous. I think we should have spent more time on the scene involving the characters as children because this came over as being irrelevant to the audience but was an essential part of the performance. My individual characterisation was believable and well acted out but some minor tweaks would have resulted in a flawless performance. The workshop I have completed has broaden my experiences and taught me valuable information that I will be able to apply in life. Also, I have enjoyed building and directing scenes with a group and learning where to employ certain methods has been enjoyable. I have gained knowledge about the human psyche and the way people behave in order to gain certain things. The workshop has also been enjoyable and fun, especially having the chance to act as immature children. ...read more.