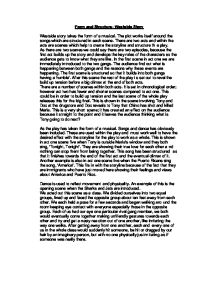 Form and Structure- Westside Story Westside story takes the form of a musical. The plot works itself around the songs which are structured in each scene. There are two acts and within the acts are scenes which help to create the storyline and structure the play. As there are two scenes we could say there are two episodes, because the first act builds up the story and develops the key roles of the characters so the audience gets to know what they are like. In the first scene in act one we are immediately introduced to the two gangs. The audience find out what is happening between both gangs and the reasons why these events are happening. The first scene is structured so that it builds into both gangs having a 'rumble'. After this scene the rest of the play is set out to revel the build up tension before a big climax at the end of both acts. There are a number of scenes within both acts. It is set in chronological order; however act two has fewer and shorter scenes compared to act one. ...read more.

Each of us had our eye one particular rival gang member, we both would eventually come together making unfriendly gestures towards each other and try and get a nasty reaction out of one another, like imitating the way one walks. After getting away from one another, each and every one of us in the whole class would suddenly hit someone, be hit or dragged by our hair by an imaginary person, but with no one physically jus imitating as if someone was really there. The sequences of the balance of dialogue, monologues and songs were factors that do effectively create the desired effect. The actions and dialogues used in the play helps to show us their background culture. For example, the Sharks; Puerto Ricans are always clicking their fingers and are always in an upright matter. This implies their status and think highly of themselves. This is also shown through dialogue, for example when Bernardo clicks his finger, all the gang follow without him having to say a word. When discussing monologues, they are spoken in both verse and song. Monologues of the characters have been structured so that they take the form of a song. ...read more.

The audience want to know what is going to happen now. What one small character can say or do can change the whole course of the play. The scene begins with Tony screaming Chino's name. Tension is still increasing as the audience know that Chino didn't really kill Maria, as this is what Doc told Tony earlier. However, the audience still want to know how this is all going to turn out. To Tony's surprise Maria appears from the shadows and they both begin to run towards each other. Everyone in the audience think they are finally found out the truth and all can be forgiven and they are going to live happily ever after. They are wrong, to the audiences shock when Tony is running towards Maria a gunshot is fired from the shadows and Tony falls into Maria's arms and eventually dies. All the characters appear and both gangs reunite and carry Tony's body out and the play is ended. The structure has been created to build up the audience for a happy ending; however the complete opposite has been made giving an unexpected shock to the audience. This is a very powerful scene and the way the scenes have been structured and set out help make tension and give satisfaction to the audience. ...read more.