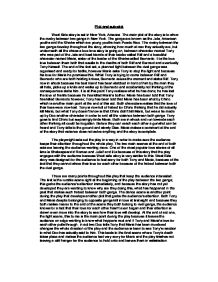 Plot and sub-plot West Side story is set in New York, America. The main plot of the story is to show the rivalry between two gangs in New York. The gangs are known as the Jets, American youths and the Sharks which are young youths from Puerto Rico. The rivalry between the two gangs develop throughout the story, showing how much at war they actually are, but underneath all the chaos a true love story is going on, between character named Tony who was part of the Jets and best friends of their leader called Riff and a beautiful character named Maria, sister of the leader of the Sharks called Bernardo. It is the true love between them both that results to the deaths of both Riff and Bernard and eventually Tony himself. The end of the first act, a planned fight between the rival gangs was organised and ready for battle, however Maria asks Tony to stop the fight and because his love for Maria he promises this. Whist Tony is trying to come between Riff and Bernardo who are both holding knives, Bernardo seizes the moment and stabs Riff. Tony now in shock because his best friend has been stabbed in front of him by the man they all hate, picks up a knife and walks up to Bernardo and accidentally not thinking of the consequences stabs him. ...read more.

In act two Doc tells Tony that Maria has been murdered changes the whole direction of the play and the audience is keen to see Tony's reaction to what Doc has actually said to him. This leads to the final scene where Tony's death takes place and makes the audience feel very sorry for Maria and the play finishes not leaving a cliff hanger for the audience to hold onto and leaves them in satisfaction. The play explores the use of suspense, climax and tension in many ways. The dance scene is one of the first where tension is brought up between the two gangs because even though on the surface they are appearing to be having a good time underneath the two rival gangs share their hatred for each other. The creation of suspense is shown at the end of both acts one and two with the deaths of both Riff and Bernardo and where Tony is left standing over the two bodies holding a knife and then realising what he has actually done, the suspense was created when Riff and Bernardo are facing each other both holding knives and just a few minutes later, both are on the floor dead. ...read more.

The love story between Tony and Maria shows the audience that love can happen in many ways and can be between anyone, this keeps the audience watching because of the rivalry between both gangs will their true love be put forward or will the rivalry stop their love altogether? Finally, the deaths at the end of act one of Riff and Bernardo leaves the audience hanging on the edge about what is going to happen next between Maria and Tony and between the two gangs themselves. The plot and story resolves itself in many ways throughout the story. We first see Tony as a young man trying to discover himself and wanting to see more in life. He is waiting for something and he finally finds Maria but because at first he does not know this first of all this comes back through the middle and the ending of the play because he has found what he had been looking and waiting for. He does not know how to deal with Maria he gets shot by Chino for the revenge of the death of Bernardo. Chino shoots Tony then forces Maria to take the gun and she asks everyone what is the point in all the fighting, violence and rivalry when violence does nothing shows nothing and finally solves nothing. ...read more.