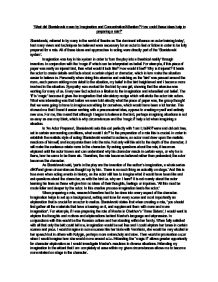 'What did Stanislavski mean by Imagination and Concentration/Attention? How could these ideas help in preparing a role?'

'What did Stanislavski mean by Imagination and Concentration/Attention? How could these ideas help in preparing a role?' Stanislavski, referred to by many in the world of theatre as 'the dominant influence on actor training today', had many views and techniques he believed were necessary for an actor to feel or follow in order to be fully prepared for a role. All of these ideas and approaches to acting were directly part of the 'Stanislavski system'. Imagination was key in his system in order to 'turn the play into a theatrical reality' through invention. In conjunction with the 'magic if' which can be interpreted as belief. For example, if this piece of paper was really an injured bird, then what would it look like? How would it feel? Why is it injured? It leads the actor to create details and facts about a certain object or character, which in turn make the situation easier to believe in. Personally when doing this exercise and watching as the 'bird' was passed around the room, each person adding more detail to the situation, my belief in the bird heightened and I became more involved in the situation. Sympathy was evoked for the bird by one girl, showing that the exercise was working for many of us. ...read more.

For example, when given the scenario of cooking a meal in a kitchen, instantaneously I imagined my own kitchen and began cooking as I would there i.e. with the stove in the same place, cupboards and drawers. This was simple to believe as I know my kitchen very well and found myself nudging drawers closed and other habits that I do in my kitchen. If I were to perform in a kitchen, I would most certainly use my own imagination to aid in a realistic portrayal of one as I see it. The situations in which we were put became more and more diverse, and as my experiences in those areas diminished, I found it much harder to imagine exactly as when in my kitchen what was happening or what the surroundings were like. Feeling the emotion in these situations was harder than believing or pretending the exercise was real, as although I had felt these emotions before, they were not as intense. Therefore, imagination is key in order to recall and keep fresh past events in an actor's mind so the feelings can be replicated in new circumstances when needed. Stanislavski dais, 'Although our feelings and emotional experiences are changeable and incapable of being grasped exactly, images are much more easily and firmly fixed in our visual memories and can be recalled at will.' ...read more.

Especially for Irina who in the first Act is very nostalgic, concentration and attention would be crucial to have. Irina is supposed to look 'far-away' and lost in her own thoughts, so if I was playing her, I would be pausing upon objects to examine before turning my attention to something else. Concentration can make the actor seem more relaxed and therefore the character will be played more freely. In conclusion, imagination and concentration/attention can greatly aid the preparation of a role. Together, they make the outward behaviour of the performer - gestures, voice, and the rhythm of movements- natural and convincing. The actor conveys the goals and objectives-the inner needs of a character. Even if all the visible manifestations of a character are mastered, a performance will appear superficial and mechanical without a deep sense of conviction and belief. The life of the character onstage is made not only dynamic but continuous. Some performers tend to emphasize only the high points of a part; in between, the life of the character stops. In real life, however, people do not stop living. Imagination greatly helps the character to be continuous in conjunction with the 'magic if'. Lastly they help to develop a strong sense of ensemble playing with other performers in a scene, and the interactions between them as all actins onstage have a purpose. The self-consciousness becomes lost and a more realistic portrayal of a character can be set free. ...read more.