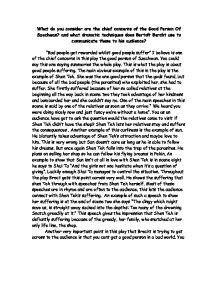 What do you consider are the chief concerns of the Good Person Of Szechwan? and what dramatic techniques does Bertolt Bercht use to communicate these to his audience?

What do you consider are the chief concerns of the Good Person Of Szechwan? and what dramatic techniques does Bertolt Bercht use to communicate these to his audience? "Bad people get rewarded whilst good people suffer" I believe is one of the chief concerns in this play the good person of Szechwan. You could say this one saying summaries the whole play. This is what the play is about good people suffering. The main obvious example of this in the play is the example of Shen Teh. She was the one good person that the gods found, but because of all the bad people (the parasites) who exploited her, she had to suffer. She firstly suffered because of her so called relatives at the beginning all the way back in scene two they took advantage of her kindness and bombarded her and she couldn't say no. One of the main speeches in this scene is said by one of the relatives as soon as they arrive " We heard you were doing nicely now and just fancy we're without a home". You as an audience have got to ask the question would the relatives come to visit if Shen Teh didn't have the shop? ...read more.

Another way Brecht gets this point across is again by the speeches from Shen Teh. A prime example of such speeches in scene five when Shen Teh again is communicating with the audience. "In our country only a little is needed before men start throwing their unbearable life away. This gives the audience the impression that there is something seriously wrong with the world that Shen Teh lives in, maybe its capitalism or maybe its pure evilness but the world has defiantly got to change before the people can begin to change. The audience after seeing this scene should be asking themselves the question "is our world like this?". This is an interesting way for Brecht to get his point across because it lets the audience relate more with what is happening in the play by letting the audience compare Shen Teh's world to our world today. Obviously the situations have been exaggerated a bit in this play but the point is still there the world has got to change. Throughout this play Brecht uses humour to relate to the audience, irony in particular. This play is not likely to happen in real life. Three gods are hardly likely to come down from the sky and communicate with mortals. ...read more.

All this exploitation that we have heard about in this play can be explained using an exploitation triangle, this shows that everyone is exploiting everyone else. I think what Brecht is trying to do is male the audience again ask them selves questions like " Why is there so much exploitation? and Why is there the need for exploitation?" This again brings me back to my previous point you cant change the people before you change the world. The way Brecht ends this play isn't conventional at all. Usually at the end of the play you find out what has happened to the characters either they live happily ever after or it's a tradedgy like in many plays. But in this play it does not happen, the story is left open. By doing this Brecht hopes the audience will go home asking them selves questions like " Does the world need to be changed?, why is there so much exploitation in this world? And is there a good person in this world even in the world today?" Brecht hopes that the audience wont go home and sleep peacefully he hopes they will go home and think about what needs to be changed. Maybe Brecht hoped that after people today watched the play they would try and change the world so it's better place for good people to live in. ...read more.