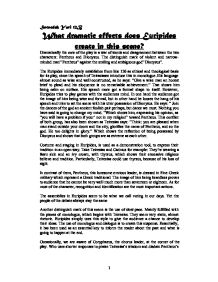 What dramatic effects does Euripides create in this scene?

Sotoodeh Yari 12B What dramatic effects does Euripides create in this scene? Dramatically the core of the play is a war of words and disagreement between the two characters: Pentheus and Dionysus. The distinguish mark of violent and narrow-minded man" Pentheus" against the smiling and ambiguous god" Dionysus". The Euripides immediately establishes from line 126 as ethical and theological basis for its play, since the speech of Teirasiases introduce this in monologue .His language almost sound as wise and well constructed, as he says: "Give a wise man an honest brief to plead and his eloquence is no remarkable achievement." That shows him being calm on surface. His speech more got a formal shape to itself. However, Euripides tries to play games with the audiences mind. In one hand the audience got the image of him being wise and formal, but in other hand he looses the hang of his speech and tries to set the scene with his utter possession of Dionysus. He says: " Join the dances of the god an ancient foolish pair perhaps, but dance we must. Nothing you have said is going to change my mind. "Which shows him, expressing his opinion, as "you will have a problem if your' not in my religion" toward Pentheus. ...read more.

Pry it up" which shows his self-ignorant of his nature. Elsewhere, We have Dionysus answering him "You don't know what you do. You don't know who you are" Pentheus hasn't got any identity. As a chorally, to the characters, Euripides uses its characters as a demonstration tool. A technique of seducing the audiences' opinion, into the benefits of age and wisdom over youth. With the mixture of dramatic tones, many points of the style and content seem to be diction. Plus using a lot of explanation marks .As we are informed by attendant, in line 435: "We have captured the quarry you set us out to catch... not empty handed either." Which simply shows, his enthusiasm and obedience towards Pentheus. But what draws reader's attention to, is Pentheus's anticipation, as he says. "Untie his hands we have him in our net." The short sentences and diction gives audience the impression of anticipation. And this is where the style of the speech changes from monologue to stichomythia and a beginning to physical actions. There are other odd aspects. As we also find the attendant in shock." Sir this stranger has come to Thebes in full of many miracles." Which leaves attendant, finding it hard to believe what is happening. At this scene's onset, Pentheus act exactly opposite to xenia. ...read more.

Not only that, he confronts Pentheus as "completely fearless" and "smiling". That portraits him, as a careless and intrepid god. The first image that audience can take of Dionysus in this scene, is being drunk "his ruddy cheeks were flushed as though with wine." we are informed that being drunk is one of the rules in Dionysus's tradition. Yet, it doesn't reach audience's expectation of a god to be stated as "drunk". All this has been covered in stichomythia style. Perhaps the most important element of the opening phrase in this scene is made by Pentheus;" You are attractive, stranger" Which emphasises his first compliment to Dionysus, in a twisting manner. As he then sarcastically continues "at least to women..." The highlight on using the attendant against Pentheus, establishes so early in this scene. The fear of this God "Dionysus" make him to say, "I am not to blame...he ordered your arrest". It creates an assumption of him, not taking the blame for Dionysus's capture. For both the audience and Pentheus. One of the more interesting techniques of this scene is the use of imagery. Especially of "women" the strict believers of Dionysus. Who are described as "untouched by human hands". The audience don't see them in the play but hear about them from the attendant as "They've gone, clean away..." which displays to the audience of what is happening in Dionysus's absence. The world described in the similes is more to embellish the scene. ...read more.