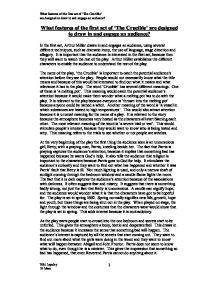 What features of the first act of 'The Crucible' are designed to draw in and engage an audience?

What features of the first act of 'The Crucible' are designed to draw in and engage an audience? In the first act, Arthur Miller draws in and engages an audience, using several different techniques, such as dramatic irony, the use of language, stage direction and allegory. It is important that the audience is interested in the first act, because then they will want to watch the rest of the play. Arthur Miller establishes the different characters to enable the audience to understand the rest of the play. The name of the play, 'the Crucible' is important to catch the potential audience's attention before they see the play. People would not necessarily know what the title means and because of this would be interested to find out what it means and what relevance it has to the play. The word 'Crucible' has several different meanings. One of these is 'a melting pot'. This meaning would catch the potential audience's attention because it would make them wonder what a melting pot has to do with the play. It is relevant to the play because everyone is 'thrown into the melting pot' because anyone could be named a witch. Another meaning of the word is 'a vessel in which substances are heated to high temperatures'. This would also attract attention because it is unusual meaning for the name of a play. It is relevant to the story because the atmosphere becomes very heated as the characters all start blaming each other. The most relevant meaning of the word is 'a severe trial or test'. ...read more.

Abigail threatens the others by saying 'I will come to you in the black of some terrible night and I will bring a pointy reckoning that will shudder you.' This changes the audience's view of Abigail, because they can see what she is really like when she is with people who know her secrets. In the fourth dramatic unit Abigail and Proctor are alone. During this scenic unit Abigail pretends that she is not violent or threatening, but instead a grown up lady who deserves John Proctor's love. Their affair is revealed when Abigail says 'Give me a word, John. A soft word.' The audience discovers that Abigail is not as innocent as she seemed at first. Proctor gently, but firmly says no by saying 'No, no, Abby. That's done with.' This gives a good impression of Proctor because the audience can tell that he is sorry for his sin and wants to forget about it. It draws in the audience because they start to feel for Proctor and start to dislike Abigail. Abigail says 'I look for John Proctor that took me from my sleep and put knowledge in my heart.' Abigail still loves him and wants to be with him. This adds interest for the audience because they want to know whether or not Proctor gives in to her. Betty's screaming brings everyone back into the bedroom during the fifth dramatic unit. In this unit, many people start crowding into the bedroom again and the atmosphere becomes frantic and the characters seem unable to calm it. ...read more.

Then she changes and says 'I tell him I don't desire to work for him, sir.' She only says this because they are saying that she will be hanged, so the only way to save herself is to say that she worked for the Devil and wants to go back to God. She is important to draw in the audience because they feel sorry for her and don't want her to be hurt. The surface meaning of the play is about the witchcraft and the trials that people were put through. It also has an allegorical meaning that is connected with the time in which the play was written. Arthur Miller was living in a time when people were put on trial and unfairly treated because they were blamed for being a Communist. Many people were not Communists, but were tortured and unfairly treated because others thought that they were. By writing 'The Crucible', Arthur Miller was trying to make his audiences understand that it was not only during the time of the witch trials that people were treated unfairly, but also in the time that they were living and times to come. He was trying to persuade people to think before they accuse someone and not always to believe people who blame other people Overall Arthur Miller is effective in drawing in and engaging an audience because he uses many different techniques and makes the audience have many different emotions throughout the first Act. This makes the audience want to know what happens in the rest of the play. What features of the first act of 'The Crucible' are designed to draw in and engage an audience? 1 Niki Lapsley 10 Mars ...read more.