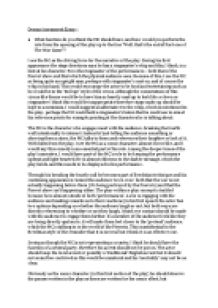 What function do you think the MC should have, and how would you perform the role from the opening of the play up to the line Well, thats the end of Part one of The War Game?

﻿Drama Assessment Essay ? * What function do you think the MC should have, and how would you perform the role from the opening of the play up to the line ?Well, that?s the end of Part one of The War Game?? I see the MC as the driving force for the narrative of the play. During his first appearance the stage directions says he has a ringmaster?s whip and this, I think, is a hint at his character. He is the ringmaster of the performances ? both that of the Pierrot show and that which the physical audience sees. Because of this, I see the MC as being quite an upright man, perhaps with ringmaster?s coat on, and of course the whip in his hand. This would encourage the actor to be loud and entertaining such as he would be in the ?Roll up!? style of the circus. Although the connotations of this circus-like theme would be to have him as heavily mad up to look like a clown or ringmaster I think this would be inappropriate therefore stage make up should be kept to a minimum. I would suggest an alternative to the whip, which is mentioned in the play- perhaps the MC could hold a ringmaster?s baton that he could use to aim at his reference points for example pointing at the characters he is talking about. ...read more.

The actor should keep the local accent or possibly a ?traditional? English accent but it should not sound too contrived as this would be unnatural and his ?neutrality? may not be as clear. Obviously as the comic character (in this first section of the play) he should observe the pauses written in the play as these are written for the comic effect, but appropriate interpretation of the joke should be taken up. For example, in the line ?You see he couldn?t get the soap? I would put more pauses for comic effect and lower the pace and tone of my voice. Here I see the MC as exasperatedly attempting to explain the joke to the audience as it has clearly gone over their heads. My performance would follow more along the lines of ?You see, he? couldn?t? get the? s-soap..??? with a grin on his face because he finds himself amusing but is disappointed that the audience don?t- his grinning is a way to try and get the audience to smile too. Then he should pause to see if the audience get the joke then, and when they don?t brush it off with a quick ?Oh never mind?, moving on swiftly. ...read more.

This is essentially what he?s doing at this point- telling them off. This delivery would also act as a message to the audience that the silly bickering between the countries was unnecessary and no better than two children squabbling. I would choose to stride over like a parent and either separate the two ?countries? apart or shake my finger at the pair to help get this across. The audience would hopefully respond to this initially as if it was a joke, but throughout these styles of lines, the message will begin to ?hammer home?. I think the role of the MC is to remind the audience that they are in fact watching a play within a play- what they are witnessing is not a straight portrayal of the war, but a Pierrot show which is depicting the war. The audience themselves almost take on the role of another audience- both their physical selves who they are, but they?re also the representations of the audience in the world of the drama at the Pierrot show. I would make this reminder come through through the addressing of the audience by the MC. He is also there to play the function of driving or leading the story in an upbeat way, keeping it light hearted and separate from the darker undertones which begin to appear at this section and more so later on in the play. ...read more.